Uploaded: Jan 9, 2018
The owners of the forthcoming Protégé Restaurant in Palo Alto are at once set apart by and, they believe, misunderstood by their culinary credentials.

Dennis Kelly and Anthony Secviar, a former sommelier and chef, respectively, from the three-Michelin-star The French Laundry in Yountville, said that some people perceive their soon-to-open California Avenue restaurant to be "The French Laundry 2.0."

"That's not what we're trying to do here," Kelly said.

They're gearing up to open at 250 S. California Ave. in February, with the kitchen and bar fully built out but the dining areas still missing seating and some millwork. The space has been under construction since August, following a protracted city-permitting process that, the owners have previously said, nearly led to them pulling out of the project. 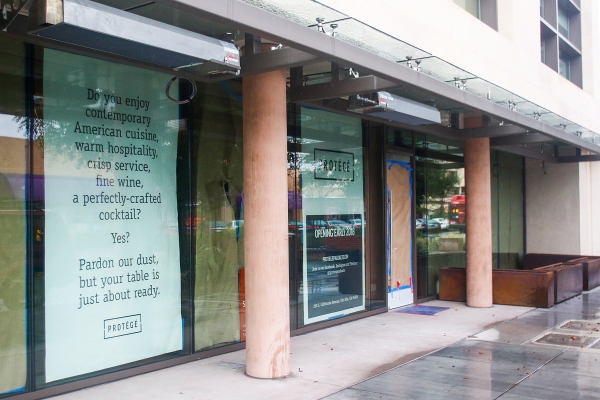 Protégé is set to open soon on California Avenue in Palo Alto. Photo by Veronica Weber.

In an interview, Kelly and Secviar described Protégé as a neighborhood restaurant with "approachable" food that will reflect their technical skill and background. Secviar was sous chef at The French Laundry for six years and most recently worked as chef de cuisine at Addison, a San Diego fine-dining restaurant. Kelly, who is one of 236 people in the world to earn the title of "master sommelier," worked at The French Laundry as captain and head sommelier for more than a decade.

They envision Protégé as falling somewhere between casual eatery and special-occasion restaurant, with a burger on the lunch menu but also a reservations-only dining room with a prix-fixe menu that starts at $52 per person.

"We don't want to alienate anybody," Secviar said.

The "heart of the restaurant," Kelly said, is an "upscale, casual" lounge area with an a-la-carte menu that will serve both lunch and dinner. It will be walk-in only.

The menu will feature shareable snacks (think oysters on the half shell; ham hock hush puppies; and smashed, fried potatoes, Secviar said), appetizers and entrees such as a burger and crispy chicken sandwich. For dessert, a custom-built pie trolley will roll by tables with three daily options: one chocolate, one fruit and one "market" pie special, with the option of going a-la-mode with hand-churned ice cream and sorbets. A sample dessert menu features a caramelized apple pie with cinnamon streusel, a baked custard tart with dark chocolate and sour cherry and a meyer lemon tart with coconut and ginger.

Protégé's desserts will be overseen by pastry chef Eddie Lopez, who previously worked at The French Laundry, acclaimed Chicago restaurant Grace and The Vintage Cave in Honolulu, Hawaii.

A separate 20-seat, reservation-only dining room will offer a hybrid of a tasting and a-la-carte menu. Customers can choose two to four dishes from a prix fixe menu with appetizers, seafood, pasta, meats and dessert. There will also be a cheese cart curated by Soyoung Scanlan of Andante Dairy, a longtime Petaluma company that makes goat's milk and cow's milk cheeses and imports and ages other cheeses. (Andante cheeses are served at The French Laundry, among other Bay Area restaurants.)

Two courses in the dining room, which will serve dinner only, will start at $52 per person.

There is also a private dining room that can accommodate parties of up to 10 people.
Secviar describes Protégé's cuisine as "New American with global influence," the menus a reflection of his personality and experience.

He plans to whole-roast meats and serve them in sliced form, such as stuffed pork loins or chicken in the lounge and duck in the dining room.

Protégé's wine cellar, a 90-square-foot room with an African blue slate floor, has room for 2,200 bottles. A full bar, the focal point of the main dining area, will serve cocktails as well as lunch and dinner.

The restaurant's name is a reference to the owners' intent to create an incubator-like environment focused on "mentoring the next generation of restaurant professionals," Kelly said. Both hope to pay homage to their own mentors, including The French Laundry's Thomas Keller, who "preaches mentorship," Secviar said.

Ideally, staff will stay for two to four years before moving on to achieve their next career goals, Kelly said. Instead of simply being employees' source of income, the owners will focus on training and education. (A bookcase next to the sommelier station will be filled with books on dining, service, wine and cocktails for staff to check out.)

Protégé will be open for lunch and dinner, Tuesday through Saturday.


Thanks for the update. Any news on the new ramen place that's supposed to open in downtown (on Ramona, I think, between Hamilton and University)? It doesn't look like construction has progressed very far over the last few months.


We're looking forward to the opening of Protégé. Welcome to the neighborhood!


It would be nice if the parking in the area could be addressed. Parking spaces are often too small even for a compact car. Maybe this was done to increase the available spots? Of course, would like more available spaces as well. Getting to this location from S.Palo Alto on Public Transportation is less than ideal and I am not one for biking.


Excited for the opening...we need more "upscale,casual" restaurants on the Penninsula, I'm tired of driving to the city for dining destinations!


I read the review with interest. But I'm concerned about a comment in this review which implies that the employees are there for training? Does this mean they don't plan to actually pay the employees but rather get them to serve as unpaid interns? I like the idea of the restaurant, but I want to know more about whether or not the employees are compensated with a fair wage before I go to spend my $$$ there.


Dave: I've reached out to Ramen Nagi for an update twice in recent weeks but haven't heard back. I'll be sure to write a blog post when they're opening.

jayne: The emphasis on training does not mean employees will not be paid. "Pay rates vary depending on the position," owner Dennis Kelly said, but the state mandates that employees are paid at least the minimum wage (currently $13.50 per hour in Palo Alto).


I am hoping for an update on the opening. We can't wait to try out this place!

A Pragmatic Approach to A Trillion Trees
By Sherry Listgarten | 1 comment | 3,113 views

The University of California’s flexible policies during COVID-19
By John Raftrey and Lori McCormick | 6 comments | 2,228 views

Repairing a Disagreement with your Beloved & “Physical” vs. “Social” Distancing
By Chandrama Anderson | 1 comment | 1,900 views