Uploaded: Nov 6, 2017
After 12 years at a small storefront on El Camino Real in Palo Alto, The Ace of Sandwiches has fully moved to a new location at a Stanford University School of Medicine building on Arastradero Road.

Sunday was the eatery's last day of business at the original location. Owner Mario Navat said he decided to close after struggling to turn a profit against numerous pressures: a lack of foot traffic, insufficient parking, the rising cost of using third party delivery services like DoorDash and the increasing number of companies offering in-office lunch to employees. (Rent, amazingly, was not among his reasons for closing, Navat said.) Sales have been decreasing for more than a year, he said.

"I had to cut my losses before it got worse," Navat said Monday. 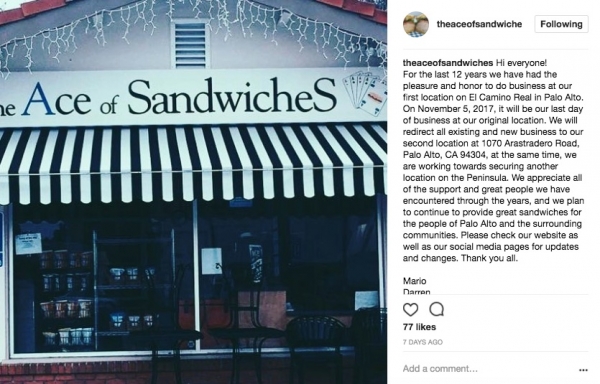 The Ace of Sandwiches ownership announced the closure of the original location on Instagram.

Navat said the Stanford School of Medicine approached him about seven months ago and asked if he wanted to operate a cafe out of an off-site research center at 1070 Arastradero Road. The appeal of business from about 700 university employees, not to mention the potential from surrounding businesses (Tesla, SAP and Pivotal are all close by) was too good to pass up.

Navat opened a new Ace of Sandwiches there with a limited menu in May. By the end of this week, the full menu from the original location will be available. He also plans to add "healthy fare" like salads, carb-free options and wraps.

The eatery is open to the public Monday through Friday from 8 a.m. to 4 p.m. Starting later this month, Navat plans to stay open for dinner until 7 p.m.

Navat said in an ideal world, he'd be running a storefront in Palo Alto, but acknowledged that "would be very costly as far as rent and overhead."

It felt "bittersweet" to close the original outpost, which he said has been fueled over so many years by strong community support.

"It was like our baby," Navat said. "But if we're not open to change, then we won't be able to survive."

I really liked the sandwiches at Ace of Sandwiches. The parking issues were definitely a problem for us. When the lot was full, we didn't know where to park. Unfortunately, I don't think that I will drive so far for a sandwich (unless I am in the neighborhood).

Report Objectionable Content
Posted by charles reilly, a resident of another community,
on Nov 6, 2017 at 3:40 pm

Nayeli makes a good reference to the parking issues throughout El Camino. In Menlo Park and RWC, many restaurants struggle to attract customers, as traffic and congestion have gotten much worse. San Carlos has many great restaurants, but good- luck finding a parking place - and public transportation is very minimal. Time for Planning Commissions to support these family businesses by helping make their locations more accessible.

Report Objectionable Content
Posted by MPer, a resident of Menlo Park: Central Menlo Park,
on Nov 7, 2017 at 9:11 am


I like there sandwiches, the parking was an issue. However, my biggest issue was the wait. It took them forever to make a sandwich. They routinely made online or corporate order while walk in customers were forced to wait, sometime an 1/2 hour or more. My guess is that lack of good customer services is as much to blame as the the other factors mentioned.

Report Objectionable Content
Posted by Bill, a resident of Barron Park,
on Nov 7, 2017 at 1:47 pm


We liked the Texan, Golden Gate and Louisiana Lightning at the Ace. Sad to see them go. But, the Driftwood Deli down the street at Matadero also does great sandwiches.

Report Objectionable Content
Posted by musical, a resident of Palo Verde,
on Nov 7, 2017 at 5:12 pm


Ace of Sandwiches El Camino location still shows on Google Maps.
No appearance yet at 1070 Arastradero as of today Nov 7.
Someone should suggest an edit, someone more familiar with them than I.
(Sadly the downtown Subway has become my default since JJ&F closed.)

Report Objectionable Content
Posted by Cartographer, a resident of another community,
on Nov 8, 2017 at 10:59 am

You can add it yourself. Go to Google Maps and search for 1070 Arastradero Road, Palo Alto, CA. In the sidebar on the left, click the link "Add a missing place."

Google relies in part from user-contributed information from people like yourself. I have not physically seen this business in operation at the new location, so I would not be one who would add the listing.

Report Objectionable Content
Posted by resident, a resident of Midtown,
on Nov 8, 2017 at 1:21 pm


Surprising that a Silicon Valley company (even a restaurant) is not social media savvy enough to add themselves to Google Maps and Yelp. Both are free, easy, and effective forms of advertising.

Report Objectionable Content
Posted by Ace, a resident of another community,
on Nov 8, 2017 at 10:03 pm


Information has been updated on Google and Yelp. Thanks!

Report Objectionable Content
Posted by The King of Sandwiches, a resident of Another Mountain View Neighborhood,
on Nov 9, 2017 at 2:18 pm


I've been one upped. CURSES!

Report Objectionable Content
Posted by PatrickD, a resident of Barron Park,
on Nov 9, 2017 at 8:33 pm


I was always torn between the Ace of Sandwiches and the Driftwood Deli. Too many good options so close to home.

Report Objectionable Content
Posted by Nick, a resident of Professorville,
on Nov 15, 2017 at 2:18 pm


Used to love their sandwiches but I had to quit going because of the service. They would totally blow off individual customers for the doordash/corporate orders. I used their preferred online ordering system, came in before or after the rush, tipped well and everything else I could.
They used to have a long line every day but made it clear they didn't need walk-in business. So not sure what the owner is talking about.

Report Objectionable Content
Posted by The Ace of Sandwiches, a resident of Barron Park,
on Nov 28, 2017 at 6:24 pm

We did and and we continue to need the walk-in business. That is the lifeline of a small business sandwich shop. Catering business is always good to have, but it is and continues to be the walk-in customer. We appreciate your business and would like for you to come in and visit us at our new location for a sandwich. Thank you.