Uploaded: Mar 24, 2017
People dining at La Bodeguita del Medio on California Avenue in Palo Alto this week might not have noticed a new note that appeared at the bottom of their receipts: "On average, for every $1 spent eating in the USA, about 95 cents goes to food, the place & a GREAT staff!" 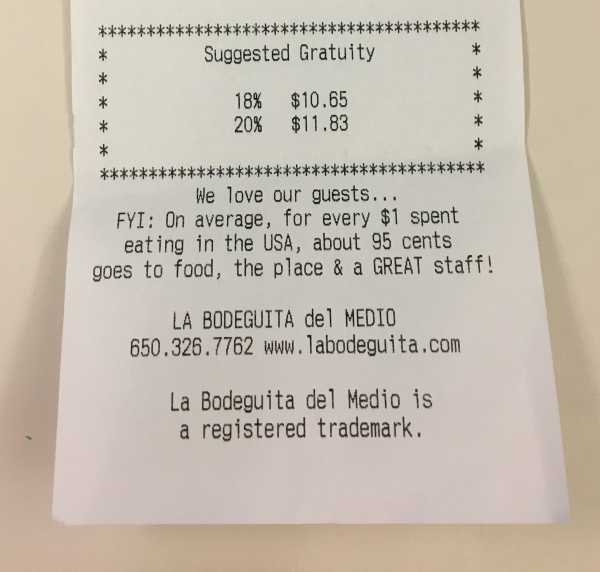 "When 95 cents on every dollar you spend goes back into your experience at a restaurant, we're hoping people will understand what a labor of love restaurants are," said Sharokina Shams, vice president of marketing and communications for the California Restaurant Association.

Shams said her organization decided to test out the educational campaign in Palo Alto in response to a group of local owners who were looking for ways to raise public awareness, California Restaurant Association's goal to do the same and the fact that "challenges in the industry faces statewide are particularly acute in the Bay Area."

For more on some of those challenges, read this story I wrote recently for the Palo Alto Weekly and our two sister papers on how restaurants are grappling with a regional labor shortage, minimum wage increases and stiff competition from tech companies, among other issues.

Other participating restaurants include The Counter and Calave on California Avenue and MacArthur Park downtown, their owners confirmed. At MacArthur Park, staff put out informational coasters with trivia questions about the economy and restaurants, like the average success or failure rate of restaurants.

The campaign could be described as a pilot; the California Restaurant Association will see how people respond in Palo Alto before potentially expanding it to other cities across the state, Shams said.

The goal is to remind people that restaurants are not just local businesses that contribute to the economy, but also "an important part of our culture," she said.

Shams declined to disclose the full list of participating restaurants, but if you notice the receipt notes around town, please feel free to post and share your thoughts in the comments section.

Report Objectionable Content
Posted by Too much tipping, a resident of Mountain View,
on Mar 24, 2017 at 7:52 pm


I notice on the picture shown that they do not even show the 15% tip option. Even worse, and digressing bait, from the topic of this story is the fact that when you charge stuff at many fast food restaurants now, you are asked to tip-- of course you have the option of choosing no tip. But since when are you expected to tip at a fast food place?

Report Objectionable Content
Posted by Marie, a resident of Downtown North,
on Mar 25, 2017 at 1:38 pm


You are not expected to tip at a no-service location like fast foods or coffee shops, and tipping is highly optional as limited service locations (where you pick up your own foods at the counter. Further, tipping is voluntary.

The unfortunate situation is how customers are arm-wrestled with tactics by restaurants.


Just a note on this specific statistic in evidence. While nation-wide, full-service restaurants earn 6% as profits, this statistic lumps the big bulk of the restaurants that fail. The statistic they are not disclosing is that surviving restaurants, like Bodeguita, if run effectively, should be earning at about twice that percentage.


If 95 cents of every dollar goes to food, the place, and a great staff, what are the costs of running a restaurant that aren't covered in these 3 categories?

Costs for "the place" seem to me to include building and/or remodeling the structure, rent or mortgage, insurance (property, liability, and owner's), interior and exterior design, the furniture, the kitchen/bar appliances (stoves, fridges, etc.), daily and nightly cleaning, regular and emergency maintenance, and the costs for the utilites to operate the building (electricity, gas, phone, internet, etc.)

And the costs for "a great staff" certainly include their wages and benefits, worker's insurance, employment taxes, and other sundry items along these lines.

Taken together, these 3 broad categories cover a huge chunk of the costs of running a restaurant (or any retail business, really.)

All that's left are various taxes (income, property, etc.), perhaps marketing costs (like the fees paid to the California Restaurant Association to devise this marketing campaign), and owner's profits.

I wonder if many restaurant patrons thought it cost a lot less to run a restaurant (and thus thought that a lot more money went into the owner's pockets), and that's why this campaign seemed to be needed?

Report Objectionable Content
Posted by charles reilly , a resident of another community,
on Mar 26, 2017 at 8:23 pm

Good comment, Max Borchuk. People go into a restaurant when it's busy and think the owners are raking in tons of cash. But, many local restaurants are small family businesses managed by people who work 12 hours a day. Tough way to make a living. Yelp and Open Table don't make it any easier.


Appropriate tipping percentages should be calculated before tax, although some restaurants show suggested percentages *after tax*. My rule is: 15% for standard service, 17-18% for very good service, 20% for great service, and 25% for incredible service. I usually adjust up for breakfast as the menu prices are typically cheaper than dinner, but the waitstaff works just as hard.

Report Objectionable Content
Posted by musical, a resident of Palo Verde,
on Mar 30, 2017 at 9:52 am


Sort of agree with Max. The 95 cents may sound dire to customers, but on second thought would be just puzzling. If the margin were higher, I'd assume wages would be raised to fill all those "help wanted" positions or reduce turnover, and we'd be back at 95 cents again. How much does a restaurant around here gross, $500K to $1M annually? That would be $25,000 to $50,000 of gravy.

Regarding tips, I was down at the canonical 15% level in the years when I was just scraping by. Now it's 20% to 22%, but I'm usually on the cheap end of the menu and don't order alcohol or even that $3 soft drink. Probably the best thing I can do for the server is "Eat and Get Out", as the clock at my favorite place says. (Look for "just kidding" in the fine print.) And also don't leave a mess. When I linger longer, my gratuity grows.

Report Objectionable Content
Posted by Steven A, a resident of Rengstorff Park,
on Mar 31, 2017 at 7:11 am


Look at what's happening in downtown Mountain View. So many popular restaurants and so many patrons. Castro Street is designed for that. California and University Avenues are not. I don't see how that little note on the bottom of the receipt is going to drive much business.


We need a complete overhaul of the percentage based tipping. Disruptors are already hear: Tender Greens, Chipotle, Poke Bars, Lemonade, etc. It does not take any more effort to bring out turkey burger for $10 than a steak for $50, yet the tip expectations are five times more for a steak. At 20% pre-tax tip for a burger would be $2, yet $10 for steak. If I ask for cheese and avocado on the turkey burger, that's $4 extra, but the waiter's effort to bring out a plate of food is still the same, but now I'm expected ti pay $.80 extra for the tip on cheese and avocado. This is crazy and needs to stop; this needs to change. Full service restaurants are closing all over Palo Alto, because the service is bad and tip surcharge expectations are outrageous.

Some of the best jobs around
By Sherry Listgarten | 5 comments | 3,627 views

Fewer Michelin stars awarded on the Peninsula this year
By The Peninsula Foodist | 7 comments | 3,133 views

People and Relationships Never Stop Being a Work in Progress
By Chandrama Anderson | 3 comments | 2,062 views