Uploaded: Feb 1, 2017
A new caffeine option is now open on California Avenue in Palo Alto: Backyard Brew, where a Palo Alto native is hoping to to build a space for both coffee and community.

Backyard Brew officially opened this weekend at 444 California Ave. in an outdoor space tucked between Country Sun and Terún, behind the Farmers Insurance building. The space was previously occupied by Toscano Garden, a garden decor shop. 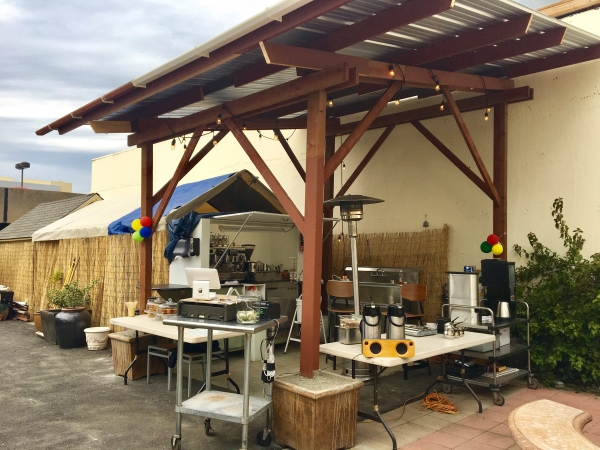 The setup at Backyard Brew, a new outdoor coffee spot on California Avenue.

Beyond fresh-brewed coffee and a few baked goods, Khalil, who was born and raised in Palo Alto, said he wants Backyard Brew to be a community gathering space where people can feel free to express themselves — literally. People are welcome to draw on the outdoor walls, scribble on tabletops, paint fountains left behind by Toscano Gardens or display their art. A large whiteboard hangs on one wall with notes scribbled from customers.

Customers should "think of it as their own little slice of freedom" in an increasingly fast-paced, high-pressure area, he said.

Khalil said he's wanted to create an open, community space in Palo Alto ever since the city's last bowling alley closed in 2011. Coffee is a more recent interest, though he's worked in restaurants and previously owned his own catering company.

When the weather improves, Khalil plans to put up a silk screen and projector to host movie nights. He's open to hosting any other "fun community things," he said, "whatever people want." The Backyard Brew website also advertises LAN nights (when people gather in the same place with their computers to create a local area network, or LAN, typically to play games together) every Friday and hackathons on Saturdays. 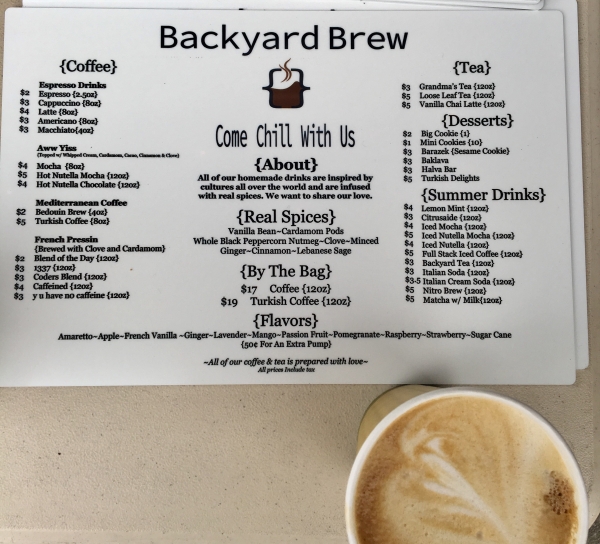 The opening menu at Backyard Brew and an almond-milk latte.

Backyard Brew is open from about 7 a.m. to 5 p.m daily. (Given the fact it's a one-man operation, the hours are "not definitive," Khalil said.)

My loyalty is with Zombie Runner Cafe and Venetia. Good luck dude! Thought this headline was going to be about a much needed beer garden with outdoor seating, got me all excited.


Sounds like an interesting concept, but is it really a good idea to open up shop without any permits or City approvals? Did he going through the County Health Department for approvals for the baked goods like other business owners?

Report Objectionable Content
Posted by member, a resident of Meadow Park,
on Feb 2, 2017 at 2:09 pm


Will presale tickets be available for the movie nights?

Report Objectionable Content
Posted by member, a resident of Evergreen Park,
on Feb 2, 2017 at 9:01 pm


Yes he has a permit. its a little red sticker on the cart. he showed it to me. ask him to show you.


I was so happy to find this new gem, hidden away off Cal ave. I left Zombie runner one day, out the door line, and happily found my self having just as nice of a cappuccino at Backyard Brew - minus the huge line and with the bonus of extra seating and groovier music!
My new favorite Palo Alto hang out for sure!

Report Objectionable Content
Posted by Thank you, a resident of College Terrace,
on Feb 6, 2017 at 11:04 am


I'd seen the signs and wondered what this new place was but never investigated. It sounds lovely. I look forward to checking it out.

Report Objectionable Content
Posted by Cheryl Lilienstein, a resident of Barron Park,
on Feb 7, 2017 at 8:37 am


Mr Khalil, I applaud your effort and...

This looks like a great place. I will stop by when I can.

In fact, it looks a lot like the Palo Alto I used to enjoy, and the Ben and Jerry's garage-with-free-silent-movies where people smoked a joint and happily licked ice cream in Burlington, Vermont. Remember the dumpling/pot sticker place? Remember the bookstore with coffee? Alas I've lived here long enough to already feel sad knowing the gung-ho earth movers will shortly be bulldozing.. thanks to the high density pro-development city council who falsely promised young voters affordable housing, here, in the land of unobtainium.

In any case, given that life is short, I wish us all luck, joy, community, buzz, great conversations, maybe you'll meet the love of your life, and excellent coffee while it lasts. Maybe I'll meet you there.

Report Objectionable Content
Posted by grande, a resident of Professorville,
on Feb 8, 2017 at 8:55 pm


Despite being one of those nostalgia-free youngsters voting for high-density unobtainium, I can somehow manage to agree with Cheryl that it's a delightful coffee shop and I hope it sticks around.

"NIMBYs and YIMBYs agree: you should check out Backyard Brew."

Residents of multi-family housing should have access to EV charging
By Sherry Listgarten | 9 comments | 4,324 views