Uploaded: Jan 5, 2017
Palo Alto native Lars Smith, who has worked in and around restaurants since he was a teenager, will open State of Mind Public House, an homage to California beer and food, in Los Altos this year.

Smith, a co-owner at The Tap Room in downtown Palo Alto, is opening the new restaurant at 101 Plaza North with his brother, Andrew, also a Tap Room co-owner, and Amy Betz, a Tap Room manager.

"It's going to be a public house and pizzeria thats inspired by the Golden State," Smith said in an interview Thursday. That means 20 to 30 California beers on tap, California wines on tap and food that draws from California ingredients.

Pizza will be the main dining event, Smith said — all hand-tossed and thin crust. Check out photos of pies on State of Minds' Instagram: 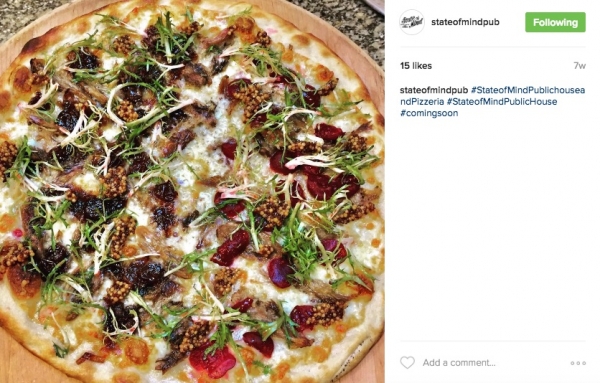 There will also be pub food, similar to what's served at The Tap Room, like "dirty fries" topped with cheese, a fried chicken sandwich and a burger with additions like chipotle and avocado, Smith said. (The Smith brothers took home first place at the 2016 Palo Alto Chili Cook Off with a recipe that incorporated beer, Mexican chocolate and hand-chopped chuck roast.)

Growing up in Palo Alto, Smith worked at now-shuttered places like longtime brewery-restaurant Gordon Biersch and Boudin Sourdough at Stanford Shopping Center. His brother was a bartender and server for many years at PF Changs in Palo Alto. They both grew up around the food industry, with family members owning restaurants and their mother, a catering business.

Smith said they've been looking for a local space to open State of Mind for three to four years, during which they saw 15 to 20 spaces that "for one reason or another didn't work out." They wanted to remain on the Midpeninsula to "stick to our roots," he said. Smith still lives in Palo Alto.

The group envisions State of Mind Public House as a "family friendly, neighborhood, local, communal hangout," Smith said. Beyond the food and drink, close to 700 square feet of the 3,700-square-foot space will be dedicated to a "brewcade" with pinball machines and video games from the '80s and '90s (similar to the set-up at The Tap Room).

"Creating a place where people can gather" is important to the owners, Smith said.

He's hoping to be open by late spring or early summer. The group is planning a full face lift of the space, the former home of longtime Los Altos establishment Maltby's Public House. (The name is just a coincidence, Smith said. They incorporated the new restaurant's name several years ago.)

This is what downtown Los Altos needs. Hoping DTLA will finally have its coming-of-age party of exciting and quality eateries, more night-life venues, and simply, a little more youthful energy. Kudos!

Report Objectionable Content
Posted by NW Resident, a resident of North Whisman,
on Jan 9, 2017 at 9:41 am


I hope the new venture will be successful, despite the high rent that forced Mr. Maltby to close. He was paying around $11K two years ago when the referenced article was written.

My family and I were very sad to see Maltby's go, since we often drove over there from MV to have meals with my mom who lives in DTLA.

Perhaps we'll give SoM a try once it is up and running.


Sounds great! Los Altos definitely needs a new pizza place. Do you know when it's going to be opened? I can't wait.


The cost and quality of the pie will determine the success. Los Altos restaurants have a long history of being long on high cost, low on dependable quality, so I look fwd to a lower to moderately priced place to eat.

Report Objectionable Content
Posted by Reader, a resident of another community,
on Jan 12, 2017 at 11:21 am

That means Smith doesn't know the exact date either. There is usually an amount of uncertainty with renovation construction work and food service business permitting.

If you click on the restaurant Instagram provided up, you will see promotional images saying "Coming Summer 2017."

If you follow their Instagram or other social media accounts, you will likely be amongst the first to know of any status changes for their opening date.

Report Objectionable Content
Posted by Roam'In Pizza, a resident of another community,
on Sep 12, 2017 at 11:50 pm


I hope the new venture will be successful. Best luck!

Report Objectionable Content
Posted by Another reader, a resident of another community,
on Sep 13, 2017 at 9:55 am


A residue of stigma (some would say karma) attaches inescapably to any new business occupying a space where a popular prior tenant was forced out opportunistically. Whether the newcomer was a-priori party to the opportunism, or just participated indirectly by the space becoming vacant, doesn't affect widespread community memory that a landlord knowingly opted to drive out a long-popular local business by demanding rent unsupportable by that business. It's happening all over the peninsula.

In downtown Los Altos, whatever other problems Turn faces now (it was closed at last word) occur against a backdrop of strong local memory that it took the address the valuable longtime AG Ferrari delicatessen was forced out of. So also with Maltby's, the local favorite independent traditional restaurant (per the link in the article): it's regrettable that whatever hard work is behind the new State of Mind Public House, it'll always be known as the place that replaced much-missed Maltby's. It'll also be higher-priced, because for any restaurant to succeed, a higher fixed expense of rent must be balanced by higher revenue-per-cover.

Residents of multi-family housing should have access to EV charging
By Sherry Listgarten | 9 comments | 4,333 views