Uploaded: Aug 2, 2016
Sweetgreen, a national salad chain that bids itself as "a leader in the movement to make healthy food available to the masses," is opening a location on Castro Street in downtown Mountain View.

Sweetgreen is moving into the building at 420 Castro St., most recently the home of fusion restaurant Mixx. Mixx closed last August after just under a year of business.

The space has since reportedly been split into two, with Sweetgreen taking over one part. No word yet on who has laid claim to the other portion.

A Sweetgreen public relations representative confirmed the opening but declined to say when the eatery will be open or to provide more details.

"We will have additional details to share in the new year," the representative wrote in an email.

The Mountain View Sweetgreen comes on the heels of a new outpost that opened in downtown Palo Alto this May.

At Sweetgreen, employees assemble salads in front of customers -- much like at a Chipotle or another fast-casual restaurant -- but the ingredients are all high-quality, seasonal and locally sourced. Whole vegetables, whole fruits and whole grains are delivered to the stores every morning, according to a page on the company's website titled "Food Ethos."

"Our team dices, slices, spices and roasts in-house every day because food tastes better when it’s made fresh," the website reads. 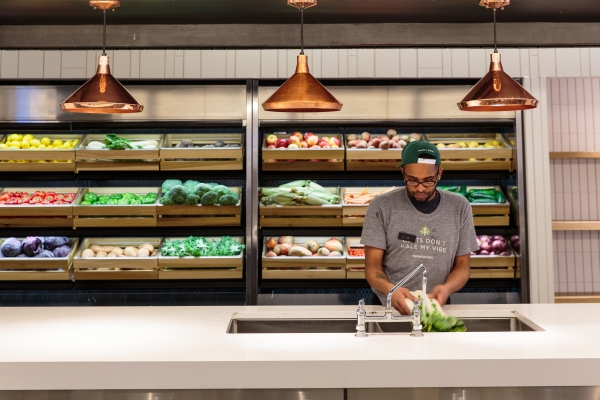 The menu changes several times a year with the seasons and also varies depending on what's available in that particular region.

Sweetgreen also believes in a "transparent supply chain," so lists food sources on each store's walls and has employees prepare food in an open kitchen.

There are 48 Sweetgreen locations throughout the country, mostly on the East Coast. The Palo Alto outpost was the chain’s second-ever in the Bay Area, following Berkeley, which opened in April.

Posted by Poke Lover, a resident of Another Mountain View Neighborhood,
on Aug 2, 2016 at 9:22 am

Yuck. Having tried the PA location once, it's a thoroughly uninspiring chain. At least it's in the dead zone and not taking up a more promising spot higher up the street.

Report Objectionable Content
Posted by Teresa, a resident of Downtown North,
on Aug 2, 2016 at 10:40 am


I was pretty sure I would find another salad place uninteresting but I just love sweet green. Their salads do a nice job of tasting like more than just their component parts mixed together in a bowl.


The problem I have with all the other salad bar type places is that they try to maximize profit by finding the best prices for their produce. That usually means non-organic South American grown produce trucked up here. I like that they have locally sourced items, but the other piece of the whole pie is organics. Will you be able to get all organic or is it just a few organic items mixed in with all the pesticide stuff?

They are competing with the farmer's markets where you can get everything for your salad using 100% locally grown and 100% organic produce. They should be aiming at that goal if they are targeting the demographic of people who actually think about what they eat.

Report Objectionable Content
Posted by Eater, a resident of Crescent Park,
on Aug 2, 2016 at 7:16 pm


We ate at Sweetgreen once in downtown Palo Alto. All 4 of us agreed we won't be back. The place is offensively loud. It is difficult to hear what the 'chefs' are saying to you across the counter. The sound bounces from wall to wall. Even worse, the food is absolutely nothing to go back for. It may have been local and fresh, but lacked anything unique or memorable.


Although everyone in my party ordered different salads, they all looked/tasted the same, and not one was particularly interesting or good. And that's the key to Sweetgreen's profitability: heaping portions of less expensive greens coupled with microscopic amounts of the more appealing items. As noted above, the downtown PA location has serious sound issues, and because of the seating arrangements, your only choice is to squeeze into a large table with two other parties (while solo diners occupy the tables for four). A totally unpleasant experience with bland food at a premium price. I'm giving them less than a year on busy Castro -- so many better options, why go there?

Our First Anniversary in my Husband’s Retirement
By Chandrama Anderson | 0 comments | 2,303 views