Uploaded: Jul 21, 2016
Downtown Mountain View now has a second fast-casual poké option with the opening of Pokéworks at 211 Castro St.

Pokéworks finally opened for business Thursday, July 21, and will host an official opening on Monday, July 25, Managing Director Kasper Hsu confirmed. Hsu had originally aimed for an opening in December, then April, then June.

Pokéworks is the latest in a local and regional wave of build-your-own, fast-casual spots dedicated to the Hawaiian seafood staple. It joins Poké Bar, which opened inside Ava’s Market & Deli on Castro Street in November, and pokéLOVE, newly opened at Town & Country Village in Palo Alto. Another poké restaurant with two locations in San Jose, Poki Bowl, is slated to open soon in Palo Alto.

But at Pokéworks, customers can elect to have their poké in bowl, burrito or salad form. View the full menu here. 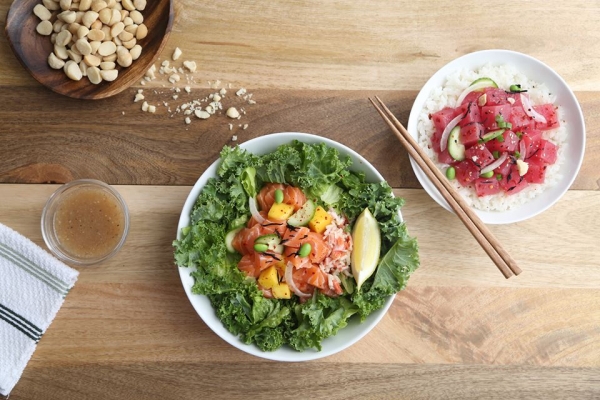 Pokéworks serves build-your-own poké bowls, wraps and salads with a variety of proteins, sauces and toppings to choose from. Photo courtesy Pokéworks.

All of Pokéworks’ fish is sustainably sourced, according to Hsu. He said in a previous interview that he hopes the Mountain View restaurant will help educate customers on seafood sustainability.

Pokéworks also operates a location in New York City, with more on the way in San Jose, Irvine, Boston and Seattle.

Eh, I guess I'll try it once since it's local. But so far none of these poke-themed "Asian Box" clones have made the POKE shine. Until they do, and bring some real aloha, "Aloha Fresh" in Cupertino will be the go to spot for those who would rather be on the Big Island :-)


Takahashi Market in San Mateo is pretty good, too. Tasty ahi poke with no filler and they sell it the traditional way (by the pound) instead of these mini-scoops that all the new-age poke places use.

Report Objectionable Content
Posted by Colin Pannikkat, a resident of Mountain View,
on Jul 25, 2016 at 10:45 pm


Funny how you have the "PokéWorks" coming out around the same time as Pokemon Go.

Report Objectionable Content
Posted by Humble observer, a resident of Old Mountain View,
on Jul 26, 2016 at 12:09 am


When Costco and Safeway both feature poke, you know poke is "in."

Report Objectionable Content
Posted by HarofaxPhill, a resident of South of Midtown,
on Sep 28, 2017 at 1:52 am