Much like the popular Smitten (which was born in San Francisco and has a location in Los Altos) and Scoop Microcreamery in Palo Alto, Creamistry uses liquid nitrogen to make its ice cream. With a temperature of minus-321 degrees Fahrenheit, liquid nitrogen can be used to freeze a base mixture on the spot. Scoop, for example, makes its ice cream in small batches, whereas Creamistry and Smitten makes each order on the spot. 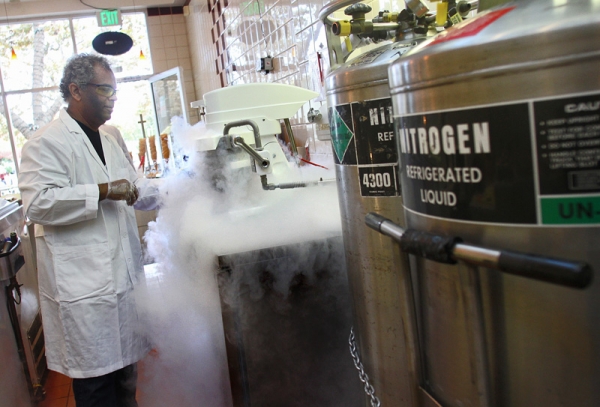 This method of making ice cream has been gaining popularity in the Bay Area; its proponents say it creates a product that is more dense, creamier and more flavorful than traditionally churned ice cream.

Creamistry Palo Alto owner Li Li said he plans to open the shop this summer at 164 University Ave., the former home of Selix Formal Wear (and one block away from Scoop).

Li, a San Francisco resident, discovered Creamistry through a friend who lives in Irvine. As someone who makes ice cream at home, he liked the liquid nitrogen concept, which was new to him when he first tried Creamistry, he said. He and his wife decided to invest in a franchise.

Creamistry's menu is more vast and customizable than its local peers. Customers can choose from several bases to make their ice cream —premium, organic, sorbet, coconut or Greek yogurt— and then go wild with a host of flavors, toppings and "upgrades." Flavors range from classic like chocolate, French vanilla and caramel to nutella, roasted black sesame, birthday cake, tiramisu, matcha green tea and French Toast Crunch (yes, the cereal).

There are also special ice cream-based based drinks like an affogato (traditionally a scoop of vanilla ice cream and a shot of espresso) and floats. Check out the full menu here.

"I do think that this will compete pretty well in the ice cream arena, especially compared to Smitten," he said.

Creamistry operates 12 locations in Southern California, with more on the way in Arizona and Texas. The Palo Alto outpost will be the first in Northern California. Li said he plans to eventually open two other Bay Area shops, in San Mateo and Dublin.

Is this nitrogen thing just some gimmick?

Report Objectionable Content
Posted by Reader, a resident of another community,
on Apr 6, 2016 at 3:38 pm


It's not really a worthless gimmick; it generates a product with different consistency than the traditional commercial ice cream freezing process.

Whether or not the end result of the liquid nitrogen ice cream is to your liking is entirely your call.

One thing the nitrogen process does allow is the ability to customize individual orders as the above blog post touches upon, something not feasible with the conventional process.

Report Objectionable Content
Posted by What a waste, a resident of Midtown,
on Apr 6, 2016 at 4:01 pm


I am constantly surprised at the trivia with which (mostly) young people fill their minds. Ice cream is delicious, yes even the cheapest.

So much money and effort is spent refining and working on variations of something so unimportant. Maybe it is an attempt to give meaning to a meaningless life. I'm so special!
Like the zillions of coffee variations. Coffee is delicious, why waste resources and time making meaningless changes.

Report Objectionable Content
Posted by @WaW, a resident of Another Mountain View Neighborhood,
on Apr 7, 2016 at 9:07 am


Maybe its all in good fun without much more deep thinking or negative projections. Lots of people do things simply because they are fun and enjoyable to them. You should try it.

Report Objectionable Content
Posted by @WaW, a resident of Another Mountain View Neighborhood,
on Apr 7, 2016 at 9:07 am


Maybe its all in good fun without much more deep thinking or negative projections. Lots of people do things simply because they are fun and enjoyable to them. You should try it.

Report Objectionable Content
Posted by @WaW, a resident of Another Mountain View Neighborhood,
on Apr 7, 2016 at 9:12 am


Also, ever have a decent cookie recipe but know you can refine it and make it better? Yah, same thing, only it turned out so well it became something enjoyable that someone could turn into a viable business, which, again, in my opinion, is not a waste of time at all.

Posting gripes and projecting negatives on a message board for something one obviously doesn't care about? That gets much closer to my definition of wasting time.


The fast ice cream freezes, the smaller the ice crystals, the more creamy (versus grainy) it feels when you eat it. Liquid nitrogen makes for extremely small ice crystals. Whether you like your ice cream so creamy is a matter of taste. I seriously doubt, however, that University needs another ice cream shop, but maybe the market can bear it. I assume that one of these companies will go national and that this is just testing the waters for that.


I've tasted Smitten Ice Cream made with liquid nitrogen. The process is kinda fun to watch - the first time- but I didn't experience any noticeable taste or texture variation compared to other high-end ice creams made the traditional way.
I did experience a huge line however - making these products to order is time consuming and labor intensive. Be prepared to wait. I predict everyone will try it at least once...


WaW says "ever have a decent cookie recipe but know you can refine it and make it better? Yah, same thing, only it turned out so well.."

Yes, in fact America's Test Kitchen does exactly that. They add an egg or 2 and more sugar to a recipe, maybe some cinnamon, and claim they have made a discovery. Christopher Kimball declares everything they do as the "best recipe ever". They are pretentious and lots of people know it.

I think waiting in line is part of the deal. People who need to kill time enjoy that. No problem, it's fun.