Appropriately called The Tap Room, the new establishment will soft open sometime next week at 233 University Ave., the former home of Workshop Burger. An "innovation center" called BHuman briefly took over the space in 2015, but didn’t last, and Syed took over the space soon after. 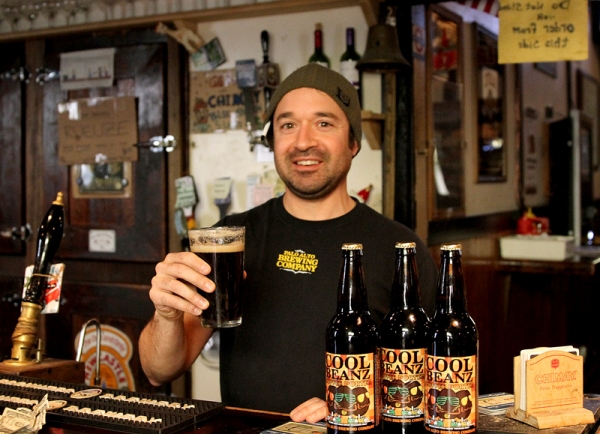 Kasim Syed, owner of Palo Alto Brewing Company, stands with a pint of Cool Beanz porter at his bar, the Rose & Crown Pub, in Palo Alto in 2014. Photo by Veronica Weber.

The Tap Room will pour 10 to 12 Palo Alto Brewing beers, plus several guest beers on tap, cider for gluten-free customers and maybe even some cold-brew coffee on tap, Syed said Monday. The guest beers will highlight Bay Area breweries from all over -- East, North and South Bay, Syed said.

Food-wise, everything will be locally sourced, with a focus on bar food like wings, Syed said. There will also be salads, sandwiches and other sharable plates. Syed brought in a friend who was a general manager for Pizza My Heart, managing more than 20 locations, to run the food side of things. A “good chef in his own right,” he’s designing the menu, Syed said.

There will, of course, be dishes that draw on beer, like a brownie made with Palo Alto Brewing’s coconut porter, Syed said. The Tap Room will serve full lunch and dinner.

They’ve made some cosmetic upgrades to the University Avenue space to bring a "brewpub look" to it, Syed said: new painting, communal tables (like in a beer garden) and showcasing some of the equipment used in the brewing processes.

With communal rather than separate tables, "hopefully people sit down with somebody they don’t know and can chat about beer or food," Syed said.

Syed is looking to do a soft opening next week. Check back for an update.

Syed, a Palo Alto native, started as a Rose & Crown employee-turned-owner who years ago brought in his craft beers for bar regulars to taste. Six years ago, he started Palo Alto Brewing Co.

I am super excited about this opening! Palo Alto has needed a brewery or tap room of sorts. Can't wait to try it out! Now, to complete the perfect city, we just need some good Ramen!

Report Objectionable Content
Posted by Chris Cummings, a resident of Crescent Park,
on Feb 5, 2016 at 6:12 pm


Love it -- Cool Craft Beers and Walkable so no driving or uber needed!