The Big Four - Part one

Ah… to be where little cable cars climb halfway to the stars on a sunny fall afternoon. I left my heart there last week.

J and I got invited to spend an afternoon with The Big Four, California governor Leland Stanford and his railroad magnate partners Mark Hopkins, C.P. Huntington, and Charles Crocker, on their old stomping grounds in San Francisco.

We first met up with the guys on the Thursday, 2PM Nob Hill tour by City Guides.

Transported back to 1878 by our guide Ken Becker, he told us that Portsmouth Square (now a one-block park in Chinatown) was the center of town. But those San Franciscan views came a-calling, and when technology allowed for it, the wealthy started to build at the top of wealthy man's or Nabob hill (later shortened to Nob).

Since Leland built first, he was tasked with figuring how to get up the hill. Inventor Andrew Hallidie had just introduced the cable car to the world, novel because it used wire rope, an idea everyone thought was a stupid. But Hallidie had been making wire rope in the mines since age 19, and in 1873 his hunch debuted perfectly on the Clay Street cable car line. This ride changed the history of San Francisco forever.

Leland begged, borrowed or stole (there are differing opinions) Hallidie's idea and created the California Street cable car, testing it out on his three best friends (Hopkins, Huntington and Crocker). This line remains the oldest U.S. cable line still in operation today.

After the ride, Stanford's besties also got the nabob bug, and certainly not to be shown up by him, also start to build. Mark Hopkins completes a 40-room-or-so Gothic-style mansion on California St. between Powell and Mason in 1878 (now the site of the Mark Hopkins Hotel). Collis Huntington builds his mansion up and across the street from the Huntington Hotel on what is now Huntington Park. Crocker's palace goes up where Grace Cathedral stands today. His estate included the infamous 40-ft "spite wall" built to piss off and block out the light of his next door neighbor who refused to sell Crocker his 40' wide 100' deep property. 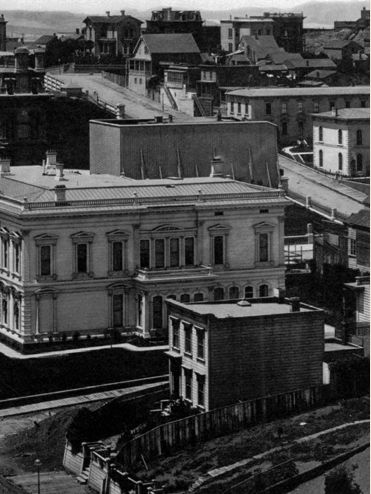 The Spite Fence is just behind the large white building (Crocker's mansion) in the center. Photo: Eadweard Muybridge, 1877

But when the earthquake hit April 18, 1906, all these grand buildings burn to the ground, except for the only two not made of wood; the Fairmont Hotel (built out of granite, marble and terra cotta), and that mysterious, majestic brownstone mansion directly across from the Fairmont, originally the Flood Mansion, now the Pacific-Union Club, an exclusive 850-member gentlemen's club with 200 eager souls on the waiting list.

No one else ever gets in. Or out? 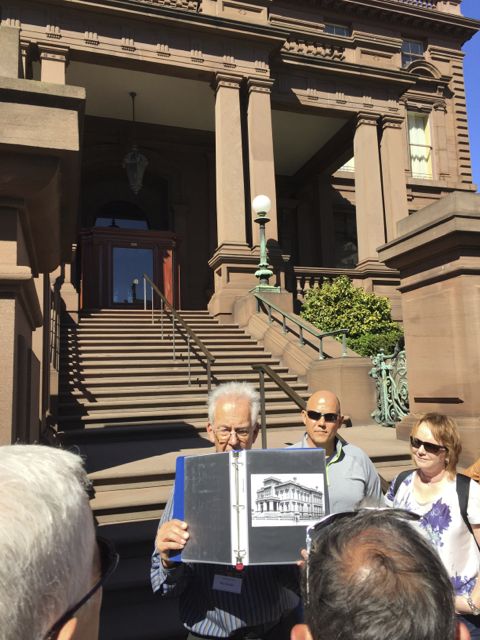 Ken talked up history and food on this, his 305th tour of the area. "Do you know how the restaurant Top of the Mark got its name?" he asked. "In 1939, then-owner and mining engineer George Smith said to his friends, "I don't know what to call the top of the Mark."

"That's it!" they answered.

"Call it Top of the Mark!" they said.

So after the tour, J and I ascend to the Top (19th floor) to sip martinis and Manhattans from Weepers' Corner, the Northwest window where World War II wives watched their Pacific-bound servicemen ship out to war in the 1940's. I can't say I felt their pain though – the 360° view was thrilling; the dirty martini….stiff. 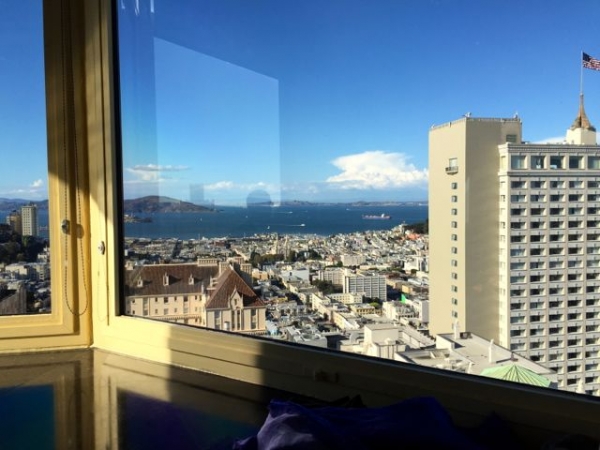 Becker also mentioned other famous Nob Hill eateries - the Fairmont's now-gone Venetian Room (where Tony Bennett first sang I Left My Heart in San Francisco in 1961), and the Tonga Room (opened in 1945 and still serving Tiki drinks today; alas I have yet to go). :( He also mentioned The Big Four restaurant in the Huntington Hotel, which seemed like the perfect spot to catch a meal "with the boys" after a first-class afternoon.

Next week we travel there.

San Francisco City Guides
A San Francisco treasure! Over 60 tours offered on every day of the week by local volunteers who love the City. Free to the public – donations welcome!
See a schedule of tours here.


Did you know?
On the second or third Thursday each July, a cable car bell-ringing contest is held in San Francisco's Union Square between cable car crews. A preliminary round determines which contestants go on to the finals in Union Square, by a process of points awarded by a panel of judges. 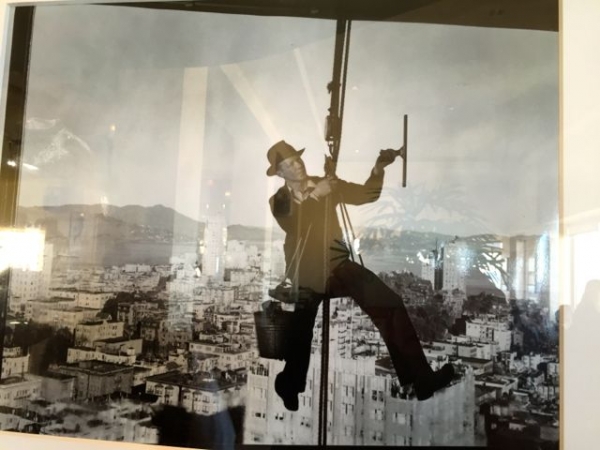 Hope you'll hang around till next week!

But one must beg to differ regarding that abomination of a martini called "dirty"....

Report Objectionable Content
+   1 person likes this
Posted by Laura Stec, a resident of Portola Valley: Westridge,
on Oct 9, 2015 at 7:38 pm

You are not a dirty drinker I see? Tis' gin for me aqui, and the dirtier, the better.

Report Objectionable Content
+   11 people like this
Posted by Random Internet Commenter, a resident of another community,
on Oct 10, 2015 at 10:11 am

He's the one who took the famous photo sequence of a galloping horse and determined that all four hooves are off the ground at one moment. He took these photos on Leland Stanford's horse farm down the Peninsula: the location of the future Stanford University.


Dear Random, Good catch and thanks for the added history. I fixed it. Got his name and the photo from the link given. Time to contact them as well for the fix.


Also, isn't Hallidie's first name Andrew rather than Andre? He was born in London and came to California during the Gold Rush.


Ring the bell (interesting name). Thank you. The W must have gotten cut off!


Some of the Stanford family stuff, including the famous galloping horse photos, are to be seen at Stanford's Cantor Art Museum. Free! But pay for metered parking.