The restaurant, which owner Dan Brunello places in the "fine fast-casual" category, will officially be slanging wood-fired pizza, sandwiches, salads, soups, coffee and local beer and wine at 341 California Ave. on Wednesday, Aug. 12.

The Fire Oak & Barley concept is the Brunello family's effort to expand Le Boulanger's reach beyond bakery, breakfast and lunch to dinner and new crowds. Central to the concept are two new elements: one, a 900-degree wood-burning oven imported from Italy ? the "focal point" of the dining room, Dan's daughter Kristina said ? and two, beer and wine. 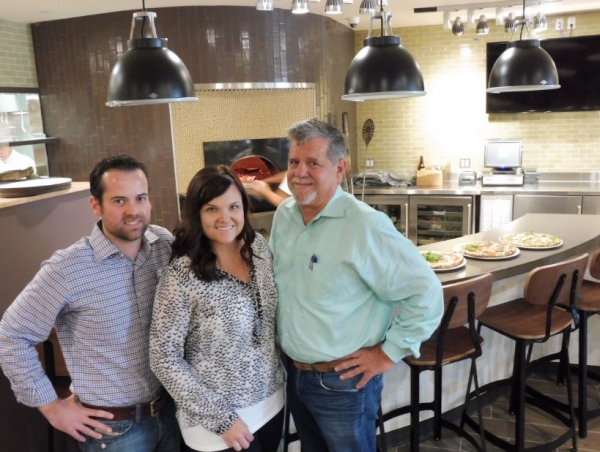 Last summer, the Brunellos snagged not one but two spaces vacated by longtime tenants Bargain Box and Avenue Florist at 341 and 347 California Ave. They gutted the building and did a complete remodel, building out what is now a 158-seat dining room. A small patio outside in the front of the restaurant seats 16 and is complete with ceiling heaters and double-sided fireplace that makes an appearance in front of some lounge-like seating inside. 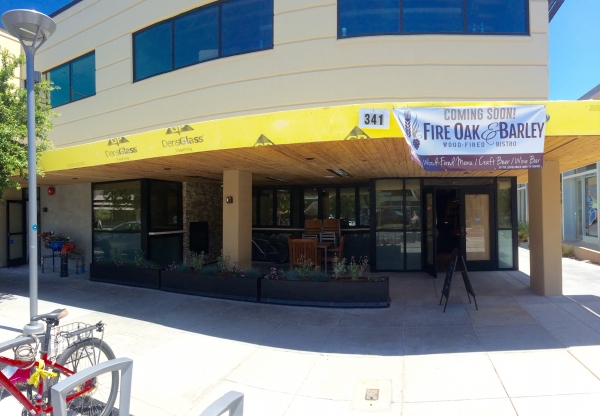 The exterior of Fire Oak & Barley at 341 California Ave. in Palo Alto, the former home of longtime tenants Bargain Box and Avenue Florist.

Though many Le Boulanger staples will be available at Fire Oak & Barley ? their breads and baked goods, as well as signature sandwiches and soups ? new menu items will revolve around the wood-fired oven. The main event will be 14-inch pizzas like a traditional margherita, parma (San Marzano tomatoes, mozzarella, prosciutto di parma and arugula), chicken pesto with wood-fired chicken and pear gongonzola (pear, Italian four-cheese blend and gorgonzola).

The kitchen will also use the oven to make a wood-fired burger (ground chuck with cheddar cheese, onion, tomato, ketchup, mayo and mustard on a fresh ciabatta bun) as well as a salmon filet. Wood-fired Hanger steak, chicken and turkey will appear on salads and sandwiches. (The hanger steak sandwich, for example, comes on a toasted sourdough garlic roll with steak, tomato, arugula, crumbled gorgonzola cheese and chimichurri sauce).

Dinner will include soups, salads, pizzas and more entrée-like sandwiches as well as appetizers like a meat and cheese platter, calamari, roasted artichoke and buratta crostini.

Don't miss opening desserts: affogato (a shot of Illy espresso with a scoop of vanilla ice cream), root beer floats and ice cream sandwich. Down the line customers might see one-serving fruit cobblers or bread pudding made in the oven, Kristina said.

The wine menu is mostly California-focused, with more than 20 wines from throughout the state, but also features wines from New Zealand and Italy.

Weekend brunch will be added after a few weeks of being open, Kristina said.

All breads, baked goods and the pizza dough are made fresh on-site daily, just like the Brunello family has been for nearly a century, beginning with Dan's father Paul opening a small retail and home delivery bakery in 1922 in Northern California after immigrating to the U.S. from Venice, Italy.

In 1956, Paul relocated to Palo Alto, renting an apartment at the end of California Avenue, Dan said. Later that year, he opened El Real Bakery on El Camino Real next to what is now the Buena Vista Mobile Home Park. The business continued to expand, and Dan and his brother Roger opened the first Le Boulanger in downtown Los Altos in August 1981.

There are now 18 Le Boulanger's throughout the Bay Area -- including nearby in Menlo Park, Mountain View and Los Altos -- as well as a robust wholesale division, but the family rejects any characterization of the company as a chain.

"Because we have a handful of locations now people tend to think we're a chain and we're corporate and this and that," Kristina said. "It kind of is a stab in the heart because we literally put our blood, sweat and tears into everything.

"We are a family business," she stressed. "We're local. We are part of the community."

Kristina is taking the lead on Fire Oak & Barley in Palo Alto. Her brother Jeff will also be involved. The new restaurant will likely be the first of multiple outposts in the Bay Area.

"We're trying to put our signature flair on this thing," Dan said. "We've been around for so many years and it's exciting to have this generation put their stamp on what we do."

I wish the new businesses were to widen our gastro-spectrum and would invite us over other cuisines, creative options. It seems a bit bizarre that Cal Avenue is so hungry for pizza imo. There are plenty of choices, what you get varies of course: Terun, PA Pizza Factory, Pizza Studio, soon to open Pieology, etc. (sorry if I missed anyone else).

I hope they have all made some fundamental business research on how to handle the competition. I would be sorry to see if some would go out of business after all the investment, and it will just look bad for the Cal Ave.

Report Objectionable Content
Posted by Carla, a resident of Downtown North,
on Jul 23, 2015 at 12:13 pm
Carla is a registered user.


MoPizza: Sort of the typical clustering in retailing. Since it is relatively easy to set up shop in this sector, and at least one of those places is selling a lot of pizza; new entrants assume that they can either steal the customers or attract new demand. The truth is that the entrants need to be much stronger/better/differentiated than the leader in order for them to pull it off. It they are not, they'll simply steal a marginal quantity from all others, eroding the success of all and themselves. It happens a lot in coffee, yogurt, tea sectors as well e.g. University Ave in Palo Alto. Good luck to all.

Report Objectionable Content
Posted by todrford, a resident of Shoreline West,
on Jul 26, 2015 at 8:05 am

Report Objectionable Content
Posted by Norman, a resident of Menlo Park: Central Menlo Park,
on Jul 26, 2015 at 9:32 am


For the Brunellos sake I hope their new restaurant isn't as passé and boring as it sounds.

Report Objectionable Content
Posted by Barry, a resident of College Terrace,
on Jul 27, 2015 at 2:05 pm


For having the word "Barley" in the name the beer line up is super weak. All very basic drafts. Better have a good happy hour to get me in there for a drink otherwise ill go to the Nut for basic beers or Rose.