Burger Please, Side of Integrity

The next time you go to lunch at Google, Apple, LinkedIn, Stanford, or any corporate cafeteria with a board or banner that promotes how sustainable their food is, please ask a question for all of us?

"Chef," you might say, "thanks for the organic and local from such and such farm, but would you happen to know the percentage of your "sustainable tomatoes," compared to the rest of the not-so-glorious tomatoes you buy each month?"

Turns out for all the hype, many "change the world" Silicon Valley corporations are slow to switch when it comes to food. Unlike grocery claims that are tracked by the Federal Trade Commission (FTC), held tightly to labeling laws, and use third-party certifiers like CCOF, it's the wild west in corporate food service where anyone can claim sustainability, and a lot of people do.

I've been researching this issue since last September after speaking on a panel sponsored by the Society for Hospitality and Food Service Management. A hundred or so food service professionals came together at LinkedIn to discuss "Food Integrity," a tricky topic for anyone to wax on about in front of others.

"Who can talk about integrity?" I began. "I guess Jesus, but since he wasn't available to speak, you're stuck with me asking the sticky questions like how are your sources being tracked and transparent, and who's verifying your claims?"

I left with more questions than answers.

So I called up the hosts, and some of the attending companies, to inquire further. Got a warm welcome at first, but by interview time, I was mysteriously blown off or forgotten about by most that agreed to speak with me.

What happened to you guys?

Then I learned about a former food service exec, no longer in Big Food because? well? maybe because she suggested that her ex-employers claims were larger than their actions? (at least that's what the attorney press release said). Deep Throat wouldn't discuss her case, but reminded me the giants of Food Service all source from the large food distributors. Everyone has their "sustainability department," purchasing a token amount from farms with faces, but most food still comes from fossil fuelish, agri-giant, who-cares-about-the-soil? growers, who "sell to food distributors and supply large foodservice companies via inhouse sourcing departments that negotiate large contracts." And to make matters worse, the nations two largest food distributors, Sysco and US Foods, are deep in merger discussions.* 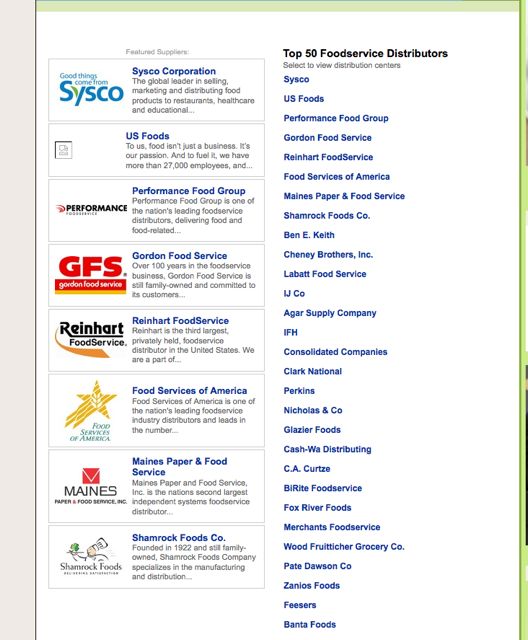 Michigan State University professor Dr. Phil Howard warned us of this in 2008 in; Cool Cuisine, Taking the Bite Out of Global Warming. A man who has made his career studying local food systems, Dr. Howard said, "if mergers keep happening at current rates, in 30 ? 50 years, our entire food system could be owned, farm-to-fork, by six or so companies world-wide, and only one of them will be based in the United States."

Guess who it is? 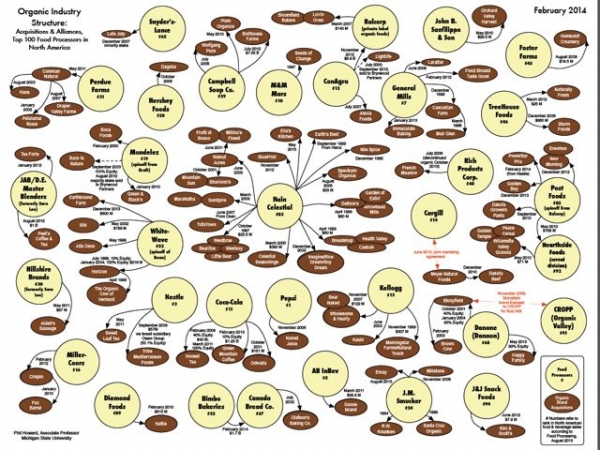 I did sit down with one food service provider, Los Altos-based Epicurean Group. "It's about profit percentage," said CEO and owner, Mary Clark Bartlett. "There are no laws about claims in food service, and it simply costs more to run a business that is dedicated to sustainability. So think about company incentives. A publicly-held company must adhere to investor demands above all else."

The person who should have spoken at Food Integrity was a guy I met afterwards, Peter Boswick, from Palo Alto-based ReadyTouch. ReadyTouch offers cafeteria technologies that communicate with employees as they dine at work. Identified by their badge or phone, employees get an automated diary of their nutrition options and activity, and rewards for healthy choices.

So Peter, if you can track and translate healthy people info, could you track healthy planet info too? Could eaters see how their meal affects their health, as well the health of the planet? **

"Employees are making decisions about Cheeseburger vs. Cobb Salad every day, and we help drive a healthier behavior using technology," was his response. "We deliver whatever information is being requested by the company. We can provide whatever they want."

So where to from here? Below are a couple ideas. Please share yours.

1. Find out who is the food service provider for your cafeteria, and who they buy their most of their food from. Come back and tell us.

2. Encourage your company to use food service providers that are making strong efforts to buy from smaller food distributors with traceable sourcing ? such as San Francisco's own Veritable Vegetable.

3. You probably won't like this, but the free food policy in many large companies encourages the continuation of "lunch by lowest bidder." Start something like $1 for Change Program, where employees pay $1 per meal, and the money is pooled to create a collaborative effort among companies that care, to set up new tracking systems and strengthen regional food systems and farms.

No one is saying 100% perfection. In fact, never let perfect be the enemy of the good. But we can do better and we must. Our systems can be traceable; the journey must be transparent. It's the next large step toward large scale sustainable food systems, and if the San Francisco Bay Area can't figure it out, no one can.

Besides, a deeper connection is what we truly hunger for. 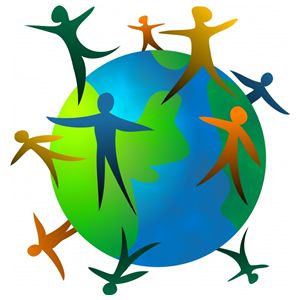 **Sysco announced in December 2013 that it agreed to acquire US Foods in a deal valued at $8.2 billion. On Feb. 19, 2015 the FTC took legal steps to block the deal on antitrust grounds, arguing that restaurants, hospitals, hotels and schools are likely to pay higher prices and at the same time receive lesser service.

** We already have the technology to track this ? it's the same used in food safety tracking. We just need to start using it for environmental safety and awareness.

Happy Earth Month!
Earth Day is April 22, and it's still all about ACTION!


The most common guess, Who is it?, but alas - not the correct one. Please guess again.


Single Guy, Interesting guess! I have never heard that one before. But no, according to Professor Howard, that's not it either. This is a big US company, but most people don't think of it as moving that strong into food - yet.


>> most people don't think of it as moving that strong into food - yet.

That seems to rule out any guesses that are already food companies.
And regarding corporate mergers, anything can happen in 30 to 50 years.
I expect Cargill, a family-held firm, to be one of few left recognizably standing.


Single Guy - I knew that had to be you. Good answer. It's Walmart, per Dr. Howard. At the publishing of Cool Cuisine - Walmart owned 20% of the food distribution in the US. Not sure what it is now.


This blog has to come down tonight so I can post before China, but I hope people will still comment. If the Valley makes enough noise, we HAVE THE POWER to drive faster change in the Bay Area food system. Please ask a few questions at work and get back to us. We really could change the corporate food service world if we all started making noise about supporting regional and sustainable (for the lack of a better word) food systems. Thank you! Xiexie!

Thanks, your clue of "This is a big US company, but most people don't think of it as moving that strong into food - yet" was helpful. I mentioned Safeway and Kroger, but they are well known grocers, so they weren't really in the mix.

The real candidates were Walmart, Costco, Target. Walmart is really the 800 pound gorilla in the room. As a discount retailer, they have the most motivation to cut costs, so controlling the farm-to-fork process is something that they would definitely consider.

Report Objectionable Content
+   1 person likes this
Posted by Mary Clark Bartlett, CEO, Epicurean Grop, a resident of Los Altos,
on Apr 17, 2015 at 9:11 am


Thank you, Laura, for addressing this important and difficult issue. As a sustainable food service management company, we pride ourselves on our food integrity. However, it isn?t easy. Even though we source local and organic produce, grass-fed beef and local, organic dairy whenever possible; as a ?volume user? we still have to purchase cereals, flour, wheat, and other products from the Midwest. There is no other local alternative that can supply the necessary volume for our educational and corporate clients.

With our purchasing policies, we are trying to increase demand for healthy, sustainable products. For example, we are searching for a sustainable, affordable substitute for canola oil, a GMO product. Most alternatives are double the price. Purchasing the healthiest products is often difficult because America?s demand for cheap food has created a system that puts price ahead of health.

Hopefully this will change with education ? when Americans understand that, in the long run, they are better off paying for real food that results in a longer, healthier life. Demand will change the food system ? vote with your fork!

Thank you for your comments. It is good to hear from a food service provider directly on this issue. We have much progress to make in this area, and it is great to know people trying to move the issue forward. Much success!

Constantly coping with the virus: We need a total lockdown now
By Diana Diamond | 39 comments | 2,793 views