The Heyday of Malcolm Margolin

Uploaded: Jan 30, 2015
If you've ever browsed the gift shop of a California state park, historical site, or museum, you've seen Malcolm Margolin's work. Books published by Heyday, the publishing company he started in 1974, include landmark volumes on California's history, natural environment, and native culture. You probably have one or two on your shelves right now. Over the last forty years, despite considerable financial pressure, Heyday has become what the San Francisco author Rebecca Solnit calls "the glue that holds the sweetest parts of California together." 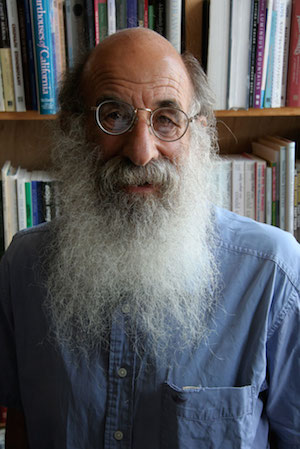 Margolin started Heyday in 1974 with the publication of the classic hiking guide The East Bay Out, inspired by his work as a groundskeeper for the East Bay Regional Parks District. Last year, to mark the 40th anniversary of the press, Heyday published a paean to its founder, The Heyday of Malcolm Margolin: The Damn Good Times of a Fiercely Independent Publisher. Edited by the Berkeley author Kim Bancroft, the book is ostensibly a biography of Margolin, but it turns out to much more. It begins with several fascinating chapters about Malcolm's upbringing in a working-class Jewish neighborhood of Boston, his unhappy tenure as an undergrad at Harvard, and his wild adventures in Puerto Rico, New York, and finally Berkeley in the 1960s and 1970s. Bancroft structures the book like an oral history. Passages narrated by Margolin alternate with testimonies from friends, associates, and family members. We come to know Malcolm the husband, Malcolm the father, and Malcolm the loyal friend.

But one avatar looms above all the others: Malcolm the Fiercely Independent Publisher. We learn how Margolin started Heyday in the living room of a rented house in Berkeley, with boxes of books tucked under the beds and behind every door. Eventually the company moved to a ramshackle old office building on University Avenue, where fellow tenants included The Madness Network News and the Network Against Psychiatric Abuse. At that time Heyday was doing contract typesetting work as well as publishing its own titles, and a former employee recounts that Eldridge Cleaver once came in to talk about doing a book of poems. By the end of the book you realize that Rebecca Solnit may have been too narrow in her assessment of Heyday: it may not only hold the sweetest parts of California together, but all the parts, period.

I found it fascinating also to read the book as a manual for business. Malcolm would caution any reader against this--Heyday continues to struggle financially--but I think there are lessons for the Silicon Valley set. When Margolin started Heyday, his only model as a business owner was the man who owned the local trucking company Margolin's father ran in the 1940s and 50s. Louie Sagansky conducted his business in the old style, which is to say he made decisions based on personal relationships, not by data analysis or application of management theory. Margolin admits that when Sagansky died, the new owners employed modern management techniques to build the company into a vastly larger and more profitable enterprise, but Malcolm understood that there were other, non-fiscal, benefits to running a company with your friends. For one thing, it was more fun to go to work. For another, you had built-in accountability with your business partners. These are two of the tenets upon which Malcolm built Heyday, and one can't help believing they have contributed to its longevity.

Anyone who knows Malcolm Margolin will tell you he is a storyteller above all else, so I will conclude with a story. Nine years ago, just before my first novel was published by a big New York house, I had a meeting with the head of the imprint, a brusque and vulgar New Yorker who ended by standing up and declaring, "Let's go make some money!" Flash forward six years: I'm in Berkeley, having lunch with Malcolm Margolin and Gayle Wattawa, Heyday's editorial director. They have expressed interest in my novel Father Junípero's Confessor but have not yet offered to publish it. Mostly we've just swapped stories about our childhoods, about Southern California, and about writing and publishing in general. I told them the story of my meeting with the New York publishing chief, and they assured me that Heyday was nothing like that. Finally at the end of lunch Malcolm stands up, throws his napkin down on the table, and announces to all present, "Well, how about it? Let's go lose some money!"

I sincerely hope Heyday didn't lose money on my novel, but after reading this biography, I know that it doesn't matter that much. Money has never been high on Malcolm Margolin's list of concerns.

Do peaceful protests do any good? How about the more violent ones?
By Diana Diamond | 7 comments | 2,520 views