Clarifying the Process of Canonization

Uploaded: Jan 26, 2015
Thank you to all the readers who have commented on my last two posts about Pope Francis's recent decision to canonize Junípero Serra, the 18th-century missionary who established the first missions in California. I realize that faith and ethnic heritage are two topics that a polite blogger ought to leave alone, I am glad to be facilitating this debate. Serra was above all a complicated man, a flawed hero worthy of a play by Shakespeare or Arthur Miller (or at least a novel by me). Re-examining Serra's life, as many of us have done since Francis's announcement last week, we are bound to discover evidence to support both sides of the sainthood argument. The truth is that our opinions don't matter. Canonization is a ritual of the Catholic Church. The Vatican sets the criteria and evaluates candidates against them.

But what about those criteria? Reading the comments on my posts, I noticed that there is some uncertainty about how the canonization procedure works, specifically concerning the miracles that must be validated. Broadly speaking, a candidate must have at least two miracles attributed to him or her before the Vatican authorizes canonization. The first miracle elevates the candidate to "Blessed" status (where Junípero Serra stands right now), and the second lifts him/her to sainthood.

That part is well understood. The misconception lies with the miracles themselves. Most people believe that the Church must uncover evidence that the holy person performed miracles during his or her lifetime, but that's not true. More often the miracles "verified" by the Vatican are recent cases of illness being cured through appeals to the prospective saint. Let's say I come down with cancer and the doctor says it's terminal. If my family and I begin praying to Junípero Serra, and I go into remission, then we have a case for a miracle. The evidence would then be presented to a special Vatican court by a priest known as a postulator, and the court would decide whether it qualifies as a miracle. Unfortunately--and this is sad news for New Yorker cartoonists as well as defenders of ecclesiastical due process--the position of "Devil's advocate" (actually known as the Promoter of the Faith) was eliminated in 1983 by Pope John Paul II.

So two miracles, and they could have happened yesterday, just by praying to Junípero Serra? Correct, but that's not what happened here. In Serra's case, Pope Francis has waived the two-miracle requirement and decided to perform what's known as an equipollent, or equivalent, canonization, a type of executive order that bestows sainthood on a person who has long been worshipped locally as a saint or is widely believed to be worthy of sainthood. Francis used the same process to canonize Peter Faber (1506-1546), the co-founder of the Jesuits, in 2013, and José de Anchieta, the "Apostle to Brazil" (1534-1597) in 2014. Before him, Pope Benedict XVI gave equipollent canonization to the mystic nun Hildegard von Bingen (1090-1179). 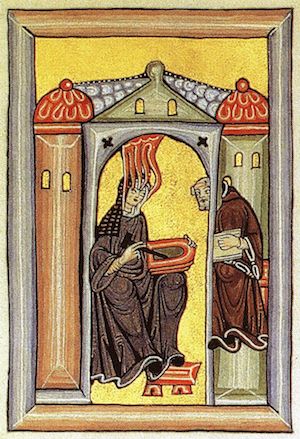 Panel from an illuminated manuscript of Liber Scivias, one of Hildegard von Bingen's accounts of her mystical visions.


Twenty nineteen marks the 250th anniversary of the Portola Expedition of 1769 and I have written or spoken in public a couple times suggest we plan some kind of party.

I also posted a snarky letter to sportswriter Mark Purdy about preferring Richard Sherman of Stanford and Seattle (and my former Oak Creek apartments neighbor) over Tom Brady who went to Serra the High School, and now a football Patriot (they play Sunday in a big sporting event called The Super Bowl, XLMIX or something ironically Greek or inscrutable). I said "que serra serra" bad pun.

In a similar vein, and I did study the Manga Cartel with Lagosmorsino and Wood at Dartmouth (coinkydinky, also founded 1769, like the Portolas -- this lead to the discovery of El Palo Alto, our namesake), I am hosting an event, tonight, over the creek. More info:

Report Objectionable Content
+   3 people like this
Posted by Contrarian, a resident of University South,
on Feb 1, 2015 at 4:31 pm


Geez, to think I almost voted for Mark.