Michio Kushi and One Peaceful World

Macrobiotics?.....now that's a weird word. If you've studied it, the common question people ask is, "What does it actually mean?"

I'm rethinking my answer, after the recent passing of Michio Kushi (May, 1926 ? December, 2014). Kushi was one of the four main students of George Ohsawa (Japanese founder of Macrobiotics) who introduced this lifestyle and eating philosophy to the United States. Kushi and his wife Aveline founded the Kushi Institute in Becket, Massachusetts. I never studied with them, but did with their counterparts, Herman and Cornellia Aihara. The Aihara's settled in Oroville, CA and founded Vega Study Center and the George Ohsawa Macrobiotic Foundation.

Macrobiotics was the first seasonal-local-organic-whole (SLOW) food happening in the U.S., and is credited with ushering in the natural foods movement. The history is rich; it's impact vital. Macrobiotics introduced the country to foods such as brown rice, whole wheat berries, miso, tamari soy sauce, sesame seeds, rice cakes, and rice syrup, and popularized many dried beans and other whole grains. In 1966, Kushi started Erewhon, a small retail store, to supply his students with the foods they were learning about. By 1969, Erewhon (name from Samuel Butler's utopian novel) was the nation's first natural foods distributor. Kushi sold the company in 1983, but one of the original stores still stands on Beverly Blvd in Los Angeles.

Herman (my teacher) was part of a group that founded Chico-San, the Chico, CA-based pioneer of organically grown brown rice in the United States (teaming with farmers such as the Lundbergs). Chico-San was also the first (?) to manufacture rice cakes in the U.S. ? made by heating brown rice in a round mold until it puffed.

Herman and Cornellia used to talk a lot about the meaning of macrobiotics with students, and I know Michio did too. It was wild being a student at Vega in the early 90's, submerged into a Japanese culinary school plopped down in the heart of California. During morning tea (bancha/twig tea with umeboshi plum and kudzu) we sat on cushions around a big wooden table and learned that "macro = large" and "biotic = life." The idea is to cleanse oneself physically, mentally and spiritually through food, thought and action, so you could indeed live a life that is large. Not an easy thing if you consider that 50% of the population suffer from constipation. (And could that constipation be of mind or spirit too?)

Herman would say the goal of macrobiotics was to obtain a flexible, healthy mind and body so no matter what happened, "you could bend, like the trees, in the wind." If we could eat better, we would think better, and then live more in peace with our surroundings. We would learn that violence and war are a waste of our energy. If we got out of own our way, and let the body and mind bring us back to the natural state of health and balance, we might even see that we, the people, are all in this crazy thing called life, together.

Lofty goal? Sure, but a lasting one for me. Herman and Cornellia remain two of my greatest teachers in life, and Michio is considered the same. We are all still waiting on the world to change, but these senseis remind us to go out there and make it happen, rather than look to someone else to do it for us. 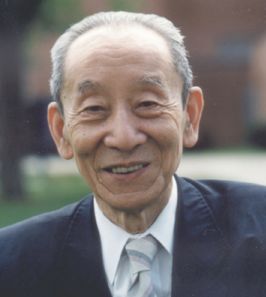 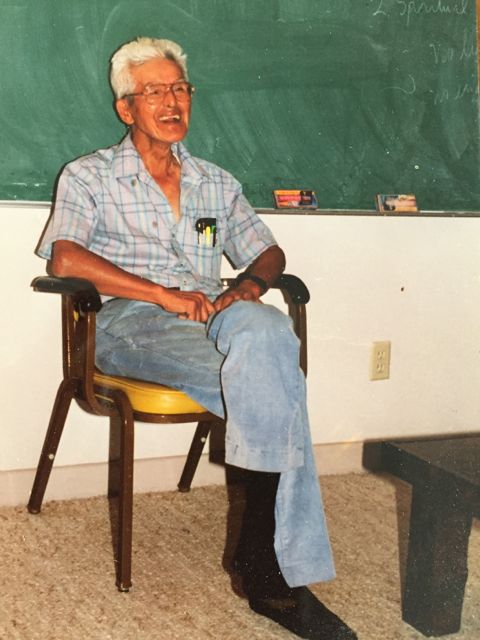 
Cornellia Aihara (March 31, 1926 - February 25, 2006) and me at French Meadows Summer Camp, still held every year in a remote area of the Tahoe National Forest. An amazing experience and you are invited! Learn more here. 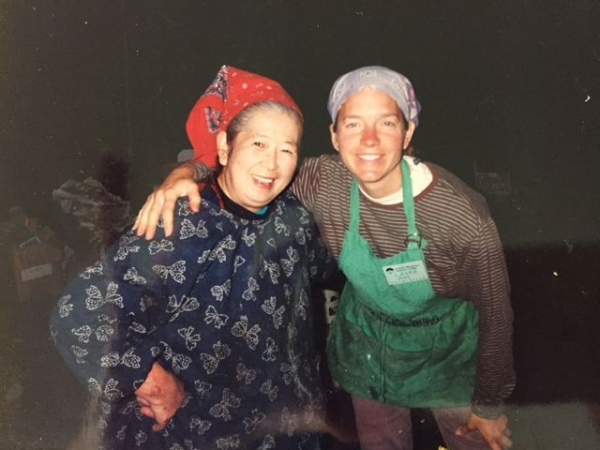 
Great article Laura! Very interesting to read about the pioneers of macrobiotics who influenced your work.

Report Objectionable Content
+   1 person likes this
Posted by Laura Stec, a resident of Portola Valley: Westridge,
on Jan 11, 2015 at 8:11 am


Thank you Casa de Cerveza, Studying with these teachers was indeed an honor, and I am still hoping any readers out there who have done so (and there are many) will add your memories, or how you have come to interpret macrobiotics. I must add that if one is interested in culinary, the base line study for many U.S. applications is of a French cuisine. HOWEVER, if your interests are in the natural foods realm, your base study is macrobiotics.


Laura, Looking forward to YOUR eventual definition of macrobiotics after re-thinking it. Thanks for the lesson, my friend.

When Herman told me to stop getting in my way (with poor food and thought) and let the natural health of the body come through - that stuck and still does. No one had ever said that to me before.

He said so many interesting things (and so did Cornellia, my main teacher, whom I haven't even wrote about here yet) I was 30 years old when I attended Vega and feeling a touch guilty. Maybe I should have been working in a corporation or the like? Maybe I was wasting my time there? During one lecture, I expressed this concern and started to cry. I'll always remember Herman's response.

"Everyone in such a rush, but don't be. Between 20 - 40 years, you study and learn from others. From 40 - 60 years you work your craft with your whole heart and soul. Then when you get to be 60, you finally start to know something, and you begin writing about it and teaching others. Don't be in such a rush."

So dear Robin Lynn, I guess I am still working and learning your answer. I'll get back to you in a few years.


I appreciated Laura's reply to Robin, with a recollection of Herman's reply to her concern that she might've been wasting her time stuck in a small, far-northern California town studying a philosophy with the strangely off-putting name "macrobiotics." (Most people mispronounce it "microbiotics.") Whether taking a break from the corporate world or otherwise, people studying with Herman & Cornellia Aihara (first in Chico, then San Francisco, then back to Chico, then finally neighboring Oroville) were confronted with a rare opportunity in an improbable setting: the chance to learn from two Japanese natives passionate about transmitting their culture to the West. Herman and Cornellia were in the direct George Ohsawa lineage (founder of macrobiotics in the West); they had studied with him in postwar Japan, as had Michio and Aveline Kushi. The Kushis and Aiharas had entirely different business and social styles, but their underlying passions were related. With Michio's recent passing, all these teachers are gone. Luckily, Laura-sensei is still working her craft with all her heart and soul, just as Herman suggested.


BTW Laura is right: Chico-San was the first maker of rice cakes in the US (detractors have referred to them as a semi-edible insulation material). Herman told how Bob Kennedy, Chico-San founder, hand-fashioned the first machines using truck brake drums. In the beginning, before they imported machines from Japan, Herman would make the rice cakes one by one, jumping up higher than his height to reach a lever and pull it down, activating the hot pressure in a cylinder to produce a single rice cake. The Chico-San company was eventually sold to Quaker and I'm not sure their products are "high-vibe" any longer!


Sandy Rothman, You are an interesting soul. The history and community of macrobiotics is rich, deep, and you are a part I have yet to meet... till now. Thank you for joining the Party! Let's change the world with great tasting food.