There's Nothing Polite About This Game

Uploaded: Dec 26, 2014
So you've had your fill of shopping and wrapping, cooking and eating, and now all that's left is to sit around and argue with the family? Turn that holiday spirit into something a bit more long lasting ? beat them in a game of Spoons instead. Put those culinary tools into unique service. Food Party! in a whole new way.

Spoons is similar to Musical Chairs, but played with a deck of cards and spoons (consider using ones you don't value). One less spoon than participants. Players are dealt 4 cards - the goal is to get four-of-a-kind. Cards are passed around the table quickly. Each time you pick one up, you discard another. Whoever gets four of a kind first grabs for a spoon. The player left empty-handed gets a letter. My family spells out PIG, so if you miss the spoon three times, you are out. Winner is the last one standing.

Sounds simple? Yes. Gentile? FAR FROM IT. Spoons is a fast moving, only-the-strong-survive game. Players might use a sneaky-quiet technique to reach for the spoon, but most grab fast and forceful. Some choose an all out assault, shoving spoons down the table to watch their competition fly out of seats and fight it out on the floor. You should remove anything breakable from around the playing area. Nothing is safe during Spoons. 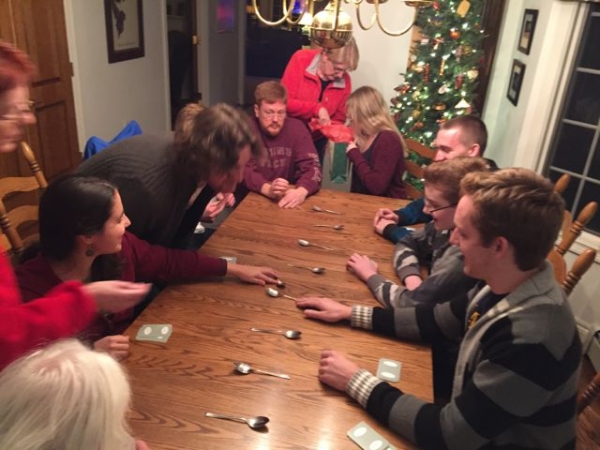 My family holds an annual Spoons game each holiday. The winner now gets their name "engraved" on the Golden Spoon trophy my nephews made a few years ago, and bragging rights for an entire year. It feels great to be Family Champ. I may not agree with your politics, but who cares, I beat you in Spoons? sucker.

This year resulted in my 20-something nephew and yours truly in the final two. He won ? that brat. 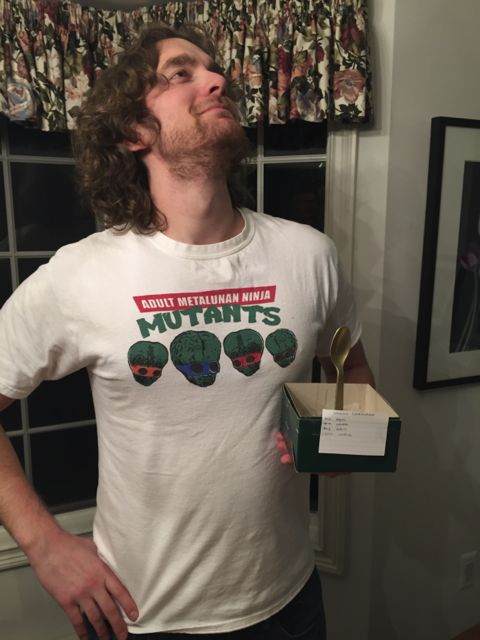 So it's back to using spoons for more mundane things like soup and ice cream.

At least until next year when I will rise again to float like a butterfly and sting like a bee?. 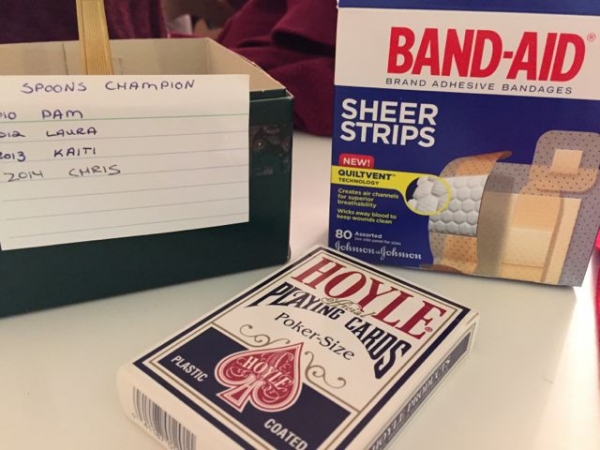 
A few quotes from this year's play:

Son: "Better to get Dad out before he breaks something."
Dad: "Like your face."

"Emotions make you weak in Spoons."

"Can I have a band-aid? I don't want to get blood all over the cards."

In Vegas, back in the 70's, I lost my leg just below the knee during a spirited game in an expert class Spoons tournament. I could have stopped the action to save my leg, but this was The Bigs, so I made my choice.

The professional Spoons game has been cleaned up since those days, but it is still fraught with danger. The sick thing is, I'd do it all over again if I could.

Report Objectionable Content
Posted by Laura Stec, a resident of another community,
on Dec 26, 2014 at 10:36 am


Nestled in a drawer, Seriously? Professional Spoons? And you lost your leg? I am astounded. I must Google this. Thanks for sharing.

Report Objectionable Content
Posted by Nestled in a drawer, a resident of Bailey Park,
on Dec 26, 2014 at 11:37 am

I really had a hard time giving it up. I thought I could walk away from it all, well, actually hop away because of the whole leg thing I mentioned, but that stainless on stainless clinking is the Siren's Song and I am helpless.

Report Objectionable Content
Posted by USA, a resident of Old Mountain View,
on Dec 26, 2014 at 6:18 pm
USA is a registered user.

Report Objectionable Content
Posted by BroIL, a resident of Atherton: Lindenwood,
on Dec 26, 2014 at 7:58 pm


Twas vicious in a settling way, the spoons play did progress... I a mere bystander, wary like the rest
Observed
the table carnage, all blood and guts and gore, did witness once again, the defeat of one called "Laura"
With much love, indeed!

Report Objectionable Content
Posted by Laura Stec, a resident of Portola Valley: Westridge,
on Dec 27, 2014 at 6:02 am


Ok Nestled in a drawer, my googling brought interesting reading, like the Top 10 famous gamblers who beat casinos (inspiring creativity), but nothing on professional Spoons. And I am sorry for your stated loss but hope you are not pulling my leg ( no disrespect intended). How did you lose one (leg) playing Spoons?

Report Objectionable Content
Posted by Laura Stec, a resident of Portola Valley: Westridge,
on Dec 27, 2014 at 6:08 am


BroIL, your poetry is sweet. But your play will be defeat.

Report Objectionable Content
Posted by CrescentParkAnon., a resident of Crescent Park,
on Dec 31, 2014 at 9:15 am

Report Objectionable Content
Posted by Laura Stec, a resident of Portola Valley,
on Jan 1, 2015 at 5:33 am


CrescentParkAnon - Genteel. Yes I think that is right. Good catch - the only one who knew that!

New sushi restaurant and steakhouse coming to Palo Alto in 2023
By The Peninsula Foodist | 5 comments | 3,005 views

What Do You Get Out of Being Stubborn?
By Chandrama Anderson | 0 comments | 1,598 views