Uploaded: Sep 4, 2014
Last month I wrote a piece about Dock Ellis, the former major-league pitcher best known as the guy who pitched a no-hitter on LSD. Because this is a blog about books, I was primarily concerned with the 1975 book Dock Ellis in the Country of Baseball, written by the poet Donald Hall in collaboration with Ellis. At the time, I had no occasion to write about Ellis. Copies of Hall's book have been gathering dust on library shelves for almost forty years. I just found a reference to the book in something else I was reading and picked it up. Turns out I was part of a trend.

This week, a new documentary is being released about Dock Ellis. "No No: A Dockumentary," directed by Jeffrey Radice, starts Friday at the Roxie Theater in San Francisco and is available for download on iTunes and elsewhere. 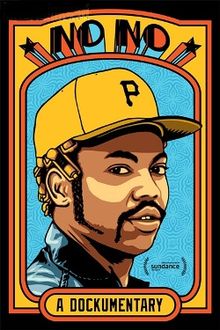 Even the casual baseball fan will find plenty to love. Director Radice has assembled a trove of rare footage, particularly of the early-1970s Pittsburgh Pirates, the so-called "Team that Changed Baseball." The '71 World Champion Pirates were the first team to field an all-black starting nine, and with their strong personalities and defiant spirit, they seemed to mark the boundary between an earlier era where the owners held all the cards and baseball's current regime, where top players command long-term contracts worth tens of millions of dollars. The film features interviews with Pirates teammates like Al Oliver, Manny Sanguillen, and Steve Blass, as well as admirers outside baseball such as the director Ron Howard, who gave Ellis a small role in the 1986 film "Gung Ho," starring Michael Keaton.

I enjoy baseball's iconoclasts, players like Brian Wilson and Ozzie Guillen and Reggie Jackson and Barry Bonds, guys who understand the bully pulpit that we give professional athletes and have no compunction about using their position to advance an agenda. Dock was the original Barry Bonds, except that his agenda wasn't strictly personal. When he defied orders from management or wore hair curlers in the bullpen he wasn't just raising hell: he was fighting for a cause. He was, in his words, "an angry black man"--at a time when the Angry Black Man was a role played everywhere from the streets of Oakland to the Olympic podium in Mexico City.

Rather than trying to fit in, as black ballplayers had done ever since Jackie Robinson broke the color barrier twenty years before, Dock purposefully called attention to his blackness. He felt that it was time to continue the struggle Robinson and others had begun. Halfway through the 1971 season, when the pitchers with the best records in the American and National Leagues were Vida Blue of the A's and Ellis of the Pirates, both African-American, Dock started making noise around reporters that he didn't think Major League Baseball would allow two black pitchers to start the All Star Game. (It had never happened before.) The National League manager, Sparky Anderson, resented Dock's suggestion but ended up starting Ellis over Tom Seaver and Steve Carlton. After the game, Ellis received a letter of support from Jackie Robinson himself. The film includes a clip of Dock reading aloud from Robinson's letter as the camera scans the neat, elegant handwriting. The letter is discussed at length in Donald Hall's book, but only when you hear Dock's voice and see Robinson's script are you are able to comprehend how important it was to Dock. This was the ultimate validation of his struggle. It may have been the highlight of his life. It is certainly the emotional heart of the film.

I would be remiss if I didn't mention the film's soundtrack. The songs were selected by Meghan Currier and Randall Poster (best known for his work on Wes Anderson's films), and the original score was composed by Adam Horovitz (Ad-Rock of the Beastie Boys). The music supervisors pulled a neat trick, matching the music to the times so that the selections move through history in sync with Dock's career, beginning with soul and funk gems from the late 60s as Dock debuts in Pittsburgh, then moving into acid rock as Dock dives deeper into drugs and alcohol, and finally exploding into punk in the late 70s as Dock's career falls apart.

Dock Ellis died of liver disease in 2008 at 63 years old. After retiring from baseball and going sober, he dedicated his life to counseling athletes and other high-risk populations about the dangers of drugs and alcohol. The documentary suggests that Dock was ahead of his time when he began calling attention to the drug problem in baseball. He played decades before steroids were commonplace, back in the days when ballplayers took diet pills in search of an edge. "Ninety-five percent of us were doing greenies," says one ballplayer interviewed for the film. Everyone was doing it, but Dock was among the first to speak about it publicly. This surprised no one who knew him. As his former teammate Bruce Kison observes, "Whatever was going on in culture? Dock was a chapter ahead."

Silicon Valley’s next meat substitute is being grown at a Morgan Hill mushroom lab
By The Peninsula Foodist | 2 comments | 2,759 views

Our First Anniversary in my Husband’s Retirement
By Chandrama Anderson | 0 comments | 1,239 views