Looking for the Humor Code

Uploaded: Jun 22, 2014
This fall, at San Jose State, I will be teaching a seminar on American humor writing. It's the first time my department has offered this course, so I have to construct the reading list from scratch. Aiming to cover both the chronological and formal range of American humor, I've settled on an assortment of what we call "primary source texts": an anthology of nineteenth-century humor edited by Mark Twain (Mark Twain's Library of Humor, 1888); a collection of essays from the New Yorker (which began ninety-something years ago as a humor rag); an anthology of ironic riffs from McSweeney's; and Bossypants by Tina Fey, which will serve as an example of the contemporary comic memoir.

This being an upper-division college course, I have supplemented this breezy list with critical and theoretical readings on the topic of humor. I had plenty of material to choose from: the mystery of human laughter has long occupied philosophers, anthropologists, psychologists, and experts in many other disciplines. Plato and Aristotle had theories on comedy. Today there is a scholarly society dedicated to the study of humor, the International Society for Humor Studies, which has a nice bibliography listing monographs and anthologies pubIished by its members. That would be the place, I thought, to find the book I needed. Problem is that most of these small-press critical tomes carry high sticker prices, on the order of hundreds of dollars. While this is normal in science and engineering courses, it is still rare in the English Department.

Then last week I found a trade book, published this year by Simon and Schuster, available for under thirty bucks: The Humor Code, by University of Colorado psychologist Peter McGraw and journalist Joel Warner. The book is billed in part as a work of stunt nonfiction, with McGraw and Warner flying around the world looking for what makes people laugh. They go to New York to meet with the New Yorker's cartoon editor, and then to Africa, Japan, Denmark, Palestine, and Amazonian Peru. The narrative is delivered in the first-person voice of Warner, the journalist, with third-person references to McGraw, the professor. It is part travelogue, part critical inquiry, as the pair explore another aspect of the humor conundrum in each part of the world. In the West Bank, for example, they examine how humans use humor to distance themselves from pain. In Japan they demonstrate how important context can be when you "get" a joke. In Denmark, they interview one of the artists behind the controversial "Face of Mohammed" cartoons, trying to discover why jokes sometimes backfire so catastrophically. 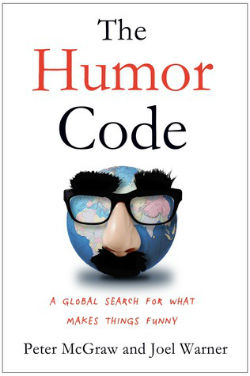 The authors tell us that the book is not meant to be a review of the academic literature, but it does a fine job elucidating the various academic theories of humor. There's the superiority theory of the Greeks (that we laugh at the misfortune of others); the relief theory of Freud (we laugh to relieve pent-up psychic energy); the various "incongruity" theories (we laugh when reality takes a surprising turn from our expectations). The authors' preferred explanation is the so-called "benign violation" theory, which holds that we laugh when the social order is violated in a surprising but ultimately harmless way.

The Humor Code reads like an extended magazine article, which is both its greatest strength and the reason I may not ultimately adopt it for my class. The chapter detailing the competing academic theories was useful, but I'm not sure it justifies the discursive chapters at the end. By the time McGraw and Warner are holed up in the Peruvian Amazon with Dr. Patch Adams and his merry band of medical clowns, I was ready to be home. Not home with a $200 paperback by a crusty Russian linguist, but closer to the purpose of my class. (There is a professor who teaches clowning at San Jose State, but it's not me.)

If you're interested in humor writing and you live in the area, there may be some seats in my class available through San Jose State's Open University program. Check the listings for ENGL 181 at the end of the summer.

Premarital and Couples: I’m not getting what I need. How can I get him/her to change?
By Chandrama Anderson | 0 comments | 1,572 views