﻿ The Goldfinch: Sometimes You Should Believe the Hype | On the Page | Nick Taylor | Palo Alto Online |

The Goldfinch: Sometimes You Should Believe the Hype

Uploaded: Jun 3, 2014
Recent shop talk aside, this is a blog dedicated to reviewing books. I've been writing here only a few months, but already I've learned some important lessons. One is that long novels take a long time to read, so if you're planning to review, say, The Goldfinch by Donna Tartt, this year's 775-page Pulitzer winner, you may go a few weeks without posting a review. Sorry about that.

And I'm so glad I did. I'm happy to report that sometimes you should believe the hype. The novel is everything it's purported to be: a taut, fast-paced literary blockbuster, simultaneously readable and sophisticated, alternately euphoric and elegiac. It's a Dickens novel told by Holden Caulfield, and if that doesn't appeal to you, then you probably don't like fiction.

Tartt is the rarest of novelists, both a stylist and a storyteller. When the novel begins, protagonist Theo Decker is a child, a teenager visiting at the Metropolitan Museum of Art with his mother. He sees a pretty redhead about his age in one of the galleries, and is happily following her around at a distance when tragedy strikes. A bomb goes off. Theo blacks out. In the confusion that follows, Theo takes a painting off the wall -- the titular Goldfinch, by a 17th-century Dutch master -- and stashes it in his school bag. He leaves the museum, disappears into the crowd, and thus becomes an art thief. 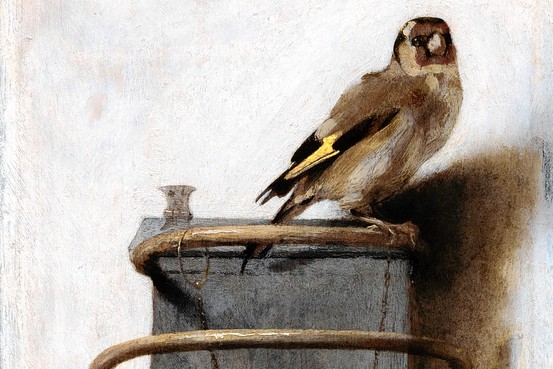 Detail from The Goldfinch (1654) by Carel Fabritius

He also becomes an orphan (remember, it's Dickens!). His mother was killed in the blast. In the ensuing months, Theo is taken in by the wealthy family of a school friend, then by his (not-dead, just estranged) father, who moves him to a ghostly half-constructed exurb of Las Vegas. There, he meets the book's other great character, a Ukrainian punk and petty thief named Boris. The boys spend their days getting drunk and high, skipping school, and making plans. Boris is more or less predestined for a life a crime, and this may be part of his appeal to Theo, who is, after all, an art thief.

Yes -- Theo still has the painting, even though a year has passed since he took it. He'd always meant to give it back, but now he feels it has been too long. Aside from the legal ramifications, the painting has come to represent so much for Theo: his mother, his former life in New York, his innocence...you could write a hell of a 10th-grade essay. It's a heavy load, this painting, for the character and the author, but Tartt balances it with grace. It is a tribute to her mastery that in a novel with so many obvious literary allusions, we never feel that we're read this one before.

Still, I feel bad writing this review, for the simple reason that there have been enough reviews already. My wife thinks the real problem with book reviews is not their disappearance from the pages of the daily newspapers but the fact that when the papers actually do review books, they all review the same half-dozen per season. I agree completely, but dear wife, how can you tell the poor book-review columnist who has just finished an 800 page novel that he can't write it up?

And here's something else: I read half a dozen reviews of The Goldfinch, and not one of them mentioned the very first thing I noticed: that this is a New York novel. This shouldn't have surprised me; nearly all literary blockbusters are set in New York. If you include the New Jersey suburbs, three of the last six Pulitzer winners have been set (at least partially) in the city: Tartt/The Goldfinch (2014), Egan/A Visit from the Goon Squad (2011), Diaz/The Brief and Wondrous Life of Oscar Wao (2008). And there are plenty more: Cunningham/The Hours (1999), Roth/American Pastoral (1998), Ford/Independence Day (1996)...

Although the middle act of The Goldfinch takes place in suburban Las Vegas, Tartt's book is very much a love song to New York. She creates detailed stage sets and casts of nuanced characters in the Upper East Side, the West Village, and even deepest Queens. Maybe it never occurred to the other reviewers to point this out. After all, most of them live in New York, too. But to this Californian, it's notable. And now duly noted.

My advice is to start the book right away. Nobody has time for an 800-page novel, even if it won the Pulitzer Prize. But you should do it anyway, even if it means calling in sick a day or two. Time spent reading is always stolen from somewhere. Isn't that why we love it so much?


I'm so glad to see a column on this site that will focus on books. I hope to see lots of variety in the selections and in the discussions they generate.

I'm sure you and your readers are aware that there are many strong opinions about Donna Tartt's "The Goldfinch." Sorry Nick, I'm not a lover of this book. Although I found it sometimes dramatic, more often I was groaning over how tedious and pretentious it was.

The story could have been told more effectively and dramatically in half the length if not for Tartt's incredibly bloated writing. After an exciting 150 or so pages (sucking me in), the writing suddenly changed and I was constantly aware of the author's presence on every page. I couldn't help but imagine her meticulously re-working nearly sentence over and over and over again. The remaining majority of the book didn't flow naturally or read well. A good editor from the publisher could have helped immensely.

Have seen several interviews with Donna Tartt I saw that she is also personally indirect and quite pretentious. She clearly lobbied hard for that Pulitzer.


Just finished the book and loved it. I sometimes forget how much I love to get lost in a book. It's very rare these days that a book draws me in quickly enough to make me stick with it. And yes - New York - a city worth 800 pages...miss it.


Sorry, not interested in the book, but I actually saw what I think was an American Goldfinch

a while back in my backyard. It was the a most striking and a most unexpected bird I've ever seen, and I've never seen one since.


I've seen them in my backyard, too! They're lovely birds. BTW, if you're interested in seeing the original painting by Fabritius, it's back in The Hague (after touring the world), at the newly-remodeled Royal Picture Gallery Mauritshuis.

Premarital and Couples: I’m not getting what I need. How can I get him/her to change?
By Chandrama Anderson | 0 comments | 1,558 views