View all posts from Sally Torbey 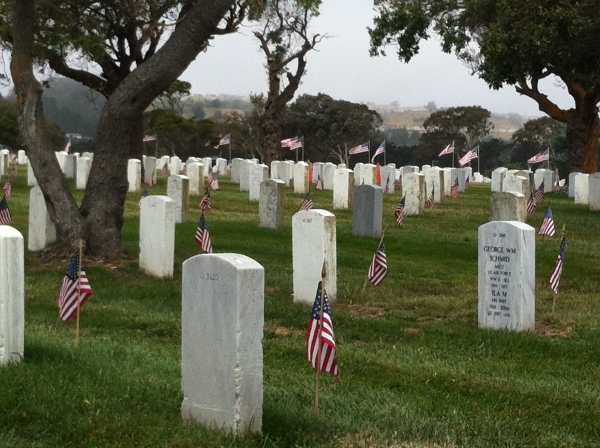 Teenage boys value sleep, but for more than a dozen years my sons, and my husband, have been waking up at dawn on Memorial Day weekend to join their Boy Scout troop at Golden Gate National Cemetery. I accompanied them this morning, as an event that gets them all out of bed so early without complaint on a holiday weekend was not to be missed.

Golden Gate National Cemetery occupies 161 acres of rolling hillside in San Bruno. This morning the fog was thick and wet and initially obscured the most distant rows of white marble gravestones that fan out in every direction, over 115,000 graves in all. Hundreds of Boy Scouts, Girls Scouts, veterans and civic organization volunteers gathered at the cemetery with the goal of decorating each grave with a flag to honor and remember the veterans buried there.

The event began with the raising of the flag, "The Star-Spangled Banner", and the bugle call of "Taps". Congresswoman Jackie Speier addressed the crowd, reminding us that each grave upon which we would place a flag was that of a hero who had served our country. A couple whose son had served and died in Afghanistan in 2006 thanked everyone for being there as well. I am sure every parent present was as moved as I was that a family who had lost their son could be thanking us with such grace and sincerity, when it was we who owed them so much.


The scoutmaster serving as master of ceremonies, who first attended the event in 1956 as a Cub Scout, instructed us on the specifics of flag planting and we all dispersed to our assigned areas. Over the next hour and a half, the cemetery was transformed to a vast sea of flags flapping in the breeze, each flag a vibrant reminder that our veterans are gone, but their sacrifices are not forgotten.

Report Objectionable Content
Posted by LJ, a resident of another community,
on May 26, 2014 at 6:04 am


So much to be grateful for. Lovely piece, Sally!

Report Objectionable Content
Posted by Sally Torbey, a Palo Alto Online blogger,
on May 26, 2014 at 8:32 am
Sally Torbey is a registered user.


Thanks LJ and PR for reading and commenting!


What a wonderful thing for your family to do together.

In our family at these times we like to remember family members who served. We have some memorabilia that we bring out and tell the history (as far as we know it) of those grandparents and great grandparents who were involved in fighting in major wars, and those who also supported the cause in other ways. Our family is lucky in that all came back even though one was seriously wounded. He was able to live a long and healthy life even though his body was permanently disabled.

I think it is important for our kids to know the realities of what war is all about. They learn about wars and battles in school. They see and read literature from the time period, they play video games often based on war and hear about what is happening today in our modern wars. But I think that one way to honor this day is to let them know about those in their own family history and what differences it made in the lives of the family at the time.

Report Objectionable Content
Posted by Debbie, a resident of Another Palo Alto neighborhood,
on May 26, 2014 at 9:39 pm


We drove past the cemetery on Sunday and saw the beautiful sea of flags among the grave markers! Thanks to your story, I could picture the scouts placing them at each grave. It made for a moving scene and reminder of the many that have sacrificed for our country.

Report Objectionable Content
Posted by Sally Torbey, a Palo Alto Online blogger,
on May 27, 2014 at 7:01 pm
Sally Torbey is a registered user.


Dear Mother of 4,
Hearing the stories of individuals is a powerful way to appreciate the sacrifices made.
Dear Debbie,
It is a beautiful and moving tribute.

Residents of multi-family housing should have access to EV charging
By Sherry Listgarten | 9 comments | 4,335 views