The Visual Magic of "The Great Beauty" 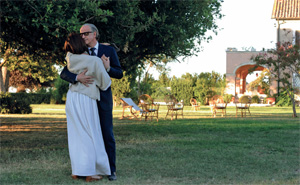 Director Paolo Sorrentino's The Great Beauty opens with a quote from Louis Celine's novel Journey to the End of Night that includes the line: "Our journey is entirely imaginary. That is its strength." In spite of the vibrant color and stunning compositions in the film, the pessimism and nihilism of Celine's novel pervades the outlook of the lead character, Jep Gambardella (Toni Servillo).

The film fairly quickly descends into a series of vignettes and scenes that look and sound like you've stepped into a fantastically loopy rave with techno mariachi and group dancing. But unlike another contemporary director of excess, Baz Luhrmann, Sorrentino has equal, if not more, skill at conveying the melancholy that undergirds decadence.

Jep is a 65-year-old man who published a single novel The Human Apparatus years ago and is currently an art journalist for a magazine run by a dwarf. To become a king of the high life was an ambition of Jep's when he came to Rome as a young man, but in fulfilling that goal, he wasted his intellectual promise.

Jep's concerns throughout the film are existential; filmgoers looking for a plot won't find a clear one here. Yet the film is rewarding if approached primarily as an experience of episodes rather than a story. A good third of the film is simply moving between spectacles ? some parties, some art ? with little distinction between the two.

A satire of Rome's contemporary art scene is filled with dramatic and pretentious types ? Talia Concept (a performance artist who talks about "extra-sensorial vibrations" and head-butts an aqueduct), a knife-thrower, a crying girl who paints as she sobs and others. What's most fascinating about this satire is Sorrentino's ability to mock these artists' silliness while also conveying their dead earnestness. Many satirists are unable to achieve any kind of depth to their characters ? the goal is solely to mock and to do this effectively, the satirist engages in as much distance as possible. There's an appealing danger and discomfort in Sorrentino's satire because the objects of his satire feel close and three-dimensional, rather than cartoonish.

Servillo plays Jep to perfection. He is able to convey in equal parts jaded cynicism, an underutilized intellect always searching for someone to attack, and the longing for something deeper. We meet three of the women that Jep loves, and the director suggests that love could be an antidote to excess ? Jep's search for something more than the high life starts when he learns that his first love has died from her husband. Her husband also tells Jep that Jep was her one true love in spite of her marriage. The most interesting and fully-drawn of the women Jep loves, is his friend's daughter Ramona, a 42-year-old stripper. His friend asks Jep to find Ramona a rich husband, but Jep winds up in love with her.

During the latter half of the movie, a saint comes to Rome from Africa. While her presence is initially comedic (she eats only roots), her presence gradually becomes profound and meaningful.

Is there a single review that fails to compare The Great Beauty to a Fellini picture? Is it a tribute to 8 1/2? Another La Dolce Vita? The implication is that Sorrentino is the lesser of the two directors for repeatedly quoting Fellini, but this film has enough of its own dazzling magic that it should show up on several (highbrow) best of the year lists.

The Great Beauty is both a critique and decadent tribute to Rome. If you like Fellini films, but are not married to the idea of Fellini as a genius, you'll like this just as much as any of his. Of note: Fellini's films were initially savaged - his directorial talent was not immediately apparent to the critics or audiences who saw his films. The Great Beauty demands multiple viewings to tease out the full meaning, but that's a testament to its complexity.

The power of The Great Beauty is two-fold: we get a complex character study of Jep and an undeniably gorgeous visual experience. Even if you find its running time far too long (I did), this is a film that you can't look away from. Two shots in particular are both breathtaking and wonderfully absurd, one featuring a giraffe among the ruins and the other featuring flamingos that scatter when breathed upon. Italy has nominated the film for a Best Foreign Film Academy Award.

Do you plan to see this film? What is the best foreign film you've seen this year?

My favorite foreign films this year have been 3 films that may not have gotten any release in the Bay Arae:

Report Objectionable Content
Posted by Anita Felicelli, a Palo Alto Online blogger,
on Dec 8, 2013 at 8:31 am
Anita Felicelli is a registered user.


Thanks for your comment @Movie lover. These, especially Juvenile Offender, look interesting to me. There are a lot of great foreign films that don't get a theatrical release on the Peninsula.

Report Objectionable Content
Posted by member, a resident of another community,
on Dec 8, 2013 at 11:38 am


I saw Un Amor, The Well-Digger\\\'s Daughter(La fille du puisatier),and Twin Sisters(De Tweeling), which are all old films, on Netflix. They were all fairly decent.


@member - oooh, The Well-Digger's Daughter! I've seen Jean de Florette and Manon of the Spring at least four or five times apiece. Eager to see the director's latest, no idea how I missed it coming out. Thanks for your comment.

Report Objectionable Content
Posted by Bill G., a resident of University South,
on Dec 8, 2013 at 4:09 pm


you had me at Celine quote and nihilism

Report Objectionable Content
Posted by Anita Felicelli, a Palo Alto Online blogger,
on Dec 10, 2013 at 8:40 am
Anita Felicelli is a registered user.

Report Objectionable Content
Posted by mom, a resident of Another Palo Alto neighborhood,
on Dec 11, 2013 at 9:04 am


Hi Anita, I loved learning about this movie. Going to try and see it over the holidays. Hopefully it will still be running.

By the way, I saw a very funny Indian movie called "Well Done Abba", about the corrupt government of India and disappearing wells (yes!). It is really sad, but told in a very entertaining, jovial way. The story is quite clever.


@mom - I hope you enjoy it! Will check out "Well Done Abba" - disappearing wells, sad but clever story, sounds right up my alley.

We need an audit of city spending
By Diana Diamond | 4 comments | 1,519 views